[UPDATED: With apologies to everyone who emailed to point out that I’d mis-spelled Tijuana in the title! It was a long day … I’d spent hours at the border.]

Below, a photo of the Macau side of the border crossing into Zhuhai, China (for those not familiar with the region: despite the fact that China has sovereignty over Macau, the border is still treated as international). I took it late this afternoon, when – it seemed – the entire population of Zhuhai was trying to get home in time for dinner. Quite honestly, the photo doesn’t do justice to the size of the crowd. The image would need to be expanded to the right, by a third, for a complete, er, picture. 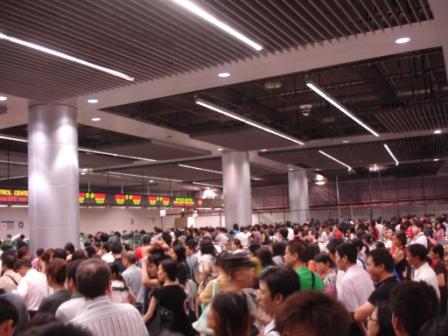 From what I could tell, most of the people in the line were Zhuhai locals (that is, locals who live on the other side of the border with Macau). And most of them were carrying shopping bags from shops that – presumably – one can’t find in Zhuhai. I suspect that many were also carrying luxury goods that – due to China’s high taxes on such items – are much cheaper to buy in Macau and Hong Kong.

What was most striking to me about this massive late Sunday afternoon migration was how much it reminded me of border crossings along the US-Mexican border. On Sunday afternoons, those crossings are often jammed with Mexican citizens returning from shopping trips in the more developed US, their packed trunks weighing down the rear ends of their cars. There, as in China, citizens of the less developed country spend weekends shopping in the more developed one (and running businesses largely based upon their ability to make such trips). I realize, of course, that there are differences, as well.