For those not familiar with it, Dongjiadu is a lower middle-class neighborhood south of the Bund, near the last remains of Shanghai’s old city. It’s old by Shanghai standards – some of the building might date back three centuries, I’m told – and poor. It’s also in the way of Shanghai’s ongoing redevelopment and bulldozers – in recent weeks, for better or worse (and often, much to the worst), it’s been disappearing. I think there’s rather too much wailing and gnashing of teeth by preservationists who couldn’t be paid to live in those leaky and miserable tenements; on the other hand, there are pieces of history in there worth preserving, and they won’t be preserved.

I was down there earlier this week and the change is startling: a giant eraser seems to have been rubbed across whole city blocks. The other thing I found startling? The recycling. 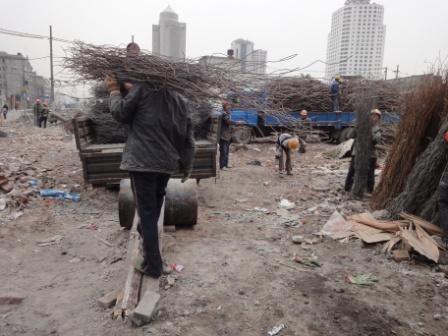 Above, workers load bundles of pencil-thin re-bar ripped from the concrete and masonry that used to hold up the buildings that stood where they now work. Before it could be bundled, it had to be cleaned, of course – which means that somebody – many somebodies – were paid to pick off the masonry and concrete that still adhered to that steel. I asked the foreman where the steel was going – nearby Bao Steel? – and his answer surprised me: it was on its way to be re-melted at a nail factory. Possibly, some of those nails will return to Dongjiadu, where they’ll be used to secure moldings in the expensive residential highrises to be built in place of the old tenements.

What surprised me most about the recycling of Dongjiadu’s ruins is the intense localization of the processing. In my experience, Shanghai’s demolition scrap is typically packed and moved off-site as quickly as possible. But something unusual is happening in Dongjiadu: there are two (and probably more) scrap yards that have appeared in the footprints of demolished buildings. Not only that, these scrap yards have processing equipment devoted to cutting the structural steel and other metal recyclables being generated nearby (they’ll get more for the metal when they sell it up the chain if it’s been pre-processed). In effect, Dongjiadu is consuming itself.

Below, one of those yards in the footprint of an old tenement. I wasn’t able to get any closer, but it’s worth noting that the piece of equipment at the center of the yard is an alligator shear. 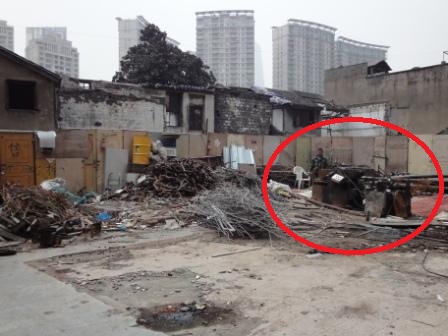 Below, to make things abundantly clear, a very powerful alligator shear photographed at a scrap yard in Wuxi. 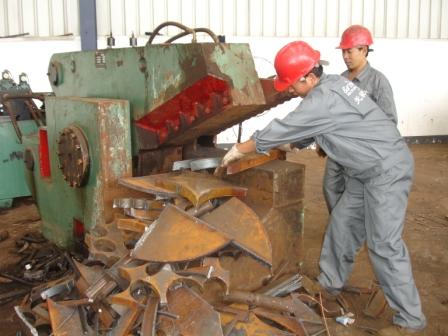 Why is this important? I’m not sure that it is – but it is interesting if, like me, you’re interested in China’s waste stream and recycling economy. What we are witnessing here is nothing less than the mechanization of demolition recycling in Shanghai. As noted above, this kind of equipment is usually found in larger scrap yards (at least, in China), and not in the small-scale neighborhood operations found in places like Dongjiadu (that can’t afford machinery). Perhaps a larger operation moved an alligator shear into Dongjiadu on the occasion of its demolition. Or maybe one of the smaller yards secured enough cash to invest in one, realizing that there’s a lot of money to be made on the neighborhood’s demolition. And that’s really the point here: somebody is making a fortune recycling Dongjiadu’s ruins. Enough to be shearing the scrap on-site, rather than sell it to a bigger scrap yard up the line. Good for them, I suppose.

One last photo. While wandering the area I came across a pile of shoes beside a family gathering up cardboard and styrofoam. Textile recycling is a big business, and even Nike recycles shoes. But I must admit, I hadn’t ever seen scrap peddlers collecting shoes on a mass scale, before. And the shoes, I’m told, we’re pulled from Dongjiadu’s ruins. 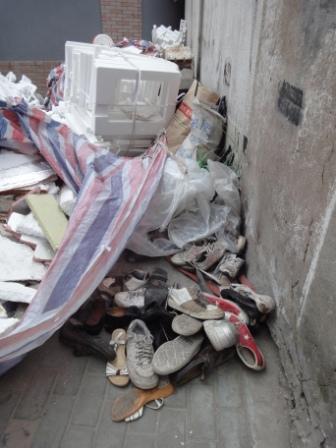 The family that was collecting them told me that they sell for RMB .03 (roughly, US$.005) per kg to a plastics recycler in Hangzhou.