The other morning I received an out-of-the-blue email from Pete Ford, Creative Director for the Australian Pavilion at Expo 2010 (World’s Fair). He was going to be in town, he told me, and he wondered if I’d be interested in a “front and back of house” tour of his creation. Absolutely! As I’ve noted elsewhere on this blog, the Australia pavilion is one of the best of the national pavilions at Expo 2010; it’s also a bit of a technical marvel. The centerpiece is a theater-in-the-round featuring a – how to describe this? – a rotating set of movie screens that surround several set-pieces that emerge from a stage. The screens, meanwhile, feature projections showing scenes from Australia and – this is the real kicker – views of the set-pieces inside of them as if the screens were windows rather than white surfaces, providing each seat with a unique view of the show. That’s no small trick. See below. 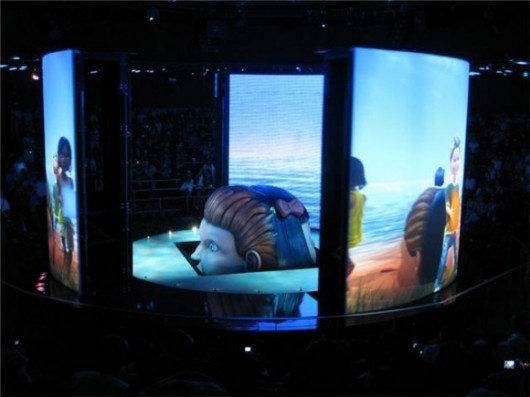 So last week, without hesitation, I met Ford at the entrance to the pavilion. It was, like every day at the Aussie pavilion, a busy day: lines wrapped around the building, folding over and around each other. As Ford led me up the ramp, past artworks specially made for the pavilion, we were jostled by the dense crowds rushing through the wide corridors, and he laughed: “I knew it was going to be busy – but MAN!”

Ford, and his company, think!OTS, aren’t newcomers to Expos. As we walked through the pavilion exhibits, he told me that his first was Expo 88 in Brisbane, Australia, and that think!OTS designed the Australian pavilion for Expo 2005 in Aichi. “So it was easier for us to begin work on this one,” he explained. Formal work began 3.5 years ago, but the current pavilion wasn’t a given: think!OTS first had to be selected in open competition against other firms and groups. Obviously, it was.

Outside of the theater itself, I asked Ford how he came up with the idea of screen spinning around a prop that emerges from a stage floor. “I was drinking beer,” he told me. “And I was holding the bottle, and the coaster, and I had the idea of the coaster going ’round and ’round the bottle.”

Of course, there was more to it than that. Ford wanted to do something physically interactive, and he most definitely didn’t want to rely on the televisions and stationary movie screens that most national pavilions feature (much to the dismay and boredom of Expo visitors). “Everybody has a TV,” he told me. “I wanted to build something unique, something that you could only see one time and place.” It’s to Ford’s and Australia’s credit – and the discredit of screen-centric pavilions – that this is such a radical concept at Expo 2010. But it is. Then again, Ford told me, there’s good reason for a national pavilion to rely upon staid movie and television screens: “They’re reliable. You don’t worry about them breaking down.” 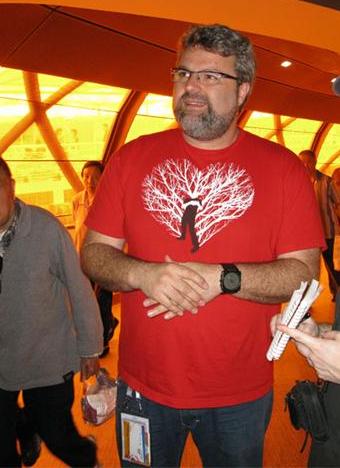 An interesting side note: Inside of the theater Ford told me that social media was always on the mind of the pavilion’s designers. “We were thinking of things and places where people could take photos for Facebook and Twitter,” he told me. “That was really important to us.”

Anyway, at that, we stepped into the theater and the show started. Three screens – each weighing five tons, rose from the floor and slowly turned around a comic-book-like set of potted plants. “The trade message from the government is always ‘Smart Australia,” Ford told me as the showed played. “But who cares about that in China? Our principle is it’s better to show rather than tell. And here we show films being projected on moving screens.” Later, he added, as the show played to a completely engaged audience: “Chinese people think we’re an outback country – and we’re not.” The screens, and the props, show a visually engaging, slightly abstract, series of vignettes that – in total – sum up Australia’s land, people, and culture. It’s an entertaining, sometimes jaw-dropping show, complete with an original score. 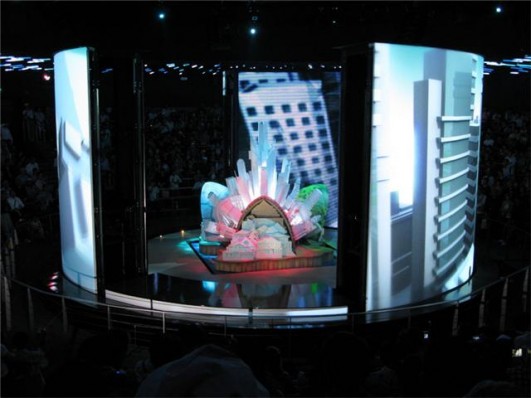 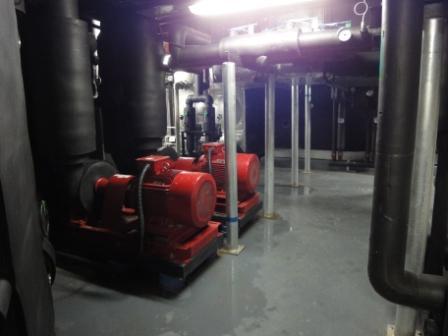 The heart of the Australian pavilion is reached through hallways, past doors and cooling equipment (that’s what it looked like to me), and then through an ordinary door Ford opened to reveal the giant siamese heads that – only a few minutes before – I’d seen at the heart of a stage surrounded by several hundred Chinese audience members. There, they seemed fun; in the bowels of the pavilion, they seemed kind of unsettling, resting upon a track run-through by chains, and slowly being pulled toward the center of the dark room where – spinning slowly around – were the massive five ton screens that rise and fall out of the stage floor. They are difficult if not impossible (and wildly unsafe!) to photograph well. Here’s my best shot: 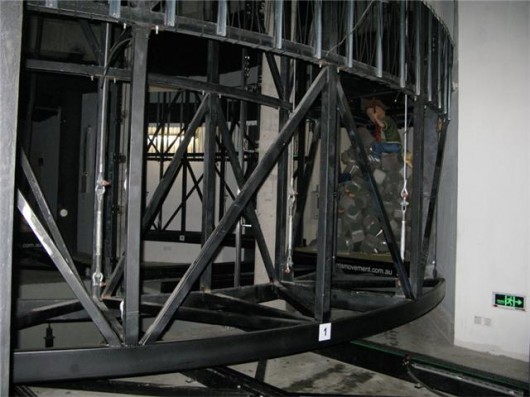 You can just see an actual screen in the upper right-hand corner of the photo – the screens are, by necessity, two stories tall (and again, they weigh five tons). They spin around at a good pace – especially if you’re in the cramped boiler room. Getting too close is not advisable. Anyway, as they spin, the various props are conveyed on the tracks and elevated – via hydraulics – into the theater. So, once again, here are the siamese heads as they’re elevated up to stage level for the audience. 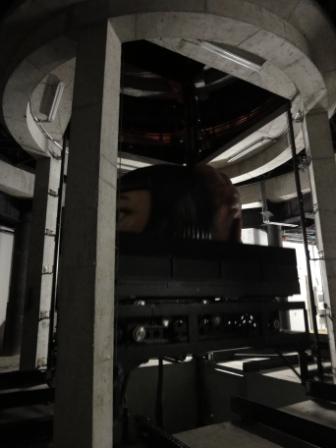 A couple of things to notice in the above photo. First, that’s some serious machinery involved in the boiler room. As it happens, it’s a single piece of machinery, designed and built in Australia for the pavilion. So, yet, that’s right: the screens and the props are all a part of the same device. According to Ford, the entire thing weighs 35 – 40 tons, and the entire 6000 square meter pavilion was built around it. Below, an image of the under-construction, US$70 million (AU$83 million) pavilion that I took back in January. Note the workers for scale. 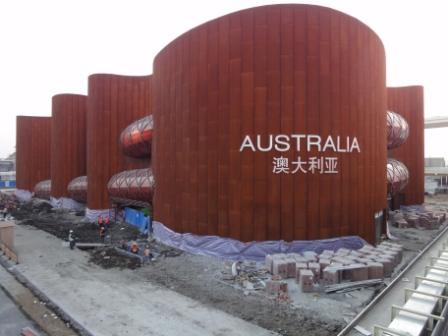 From the boiler room (my term, by the way), we ascended a staircase and entered the pavilion control room where technicians spend their days monitoring the health and operations of the complicated pavilion. 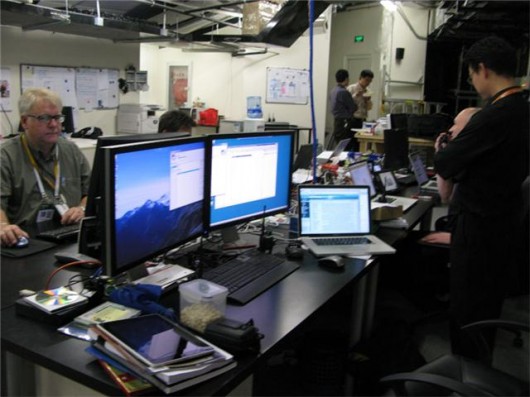 The never center is a large bank of computers (looked large to me, at least). 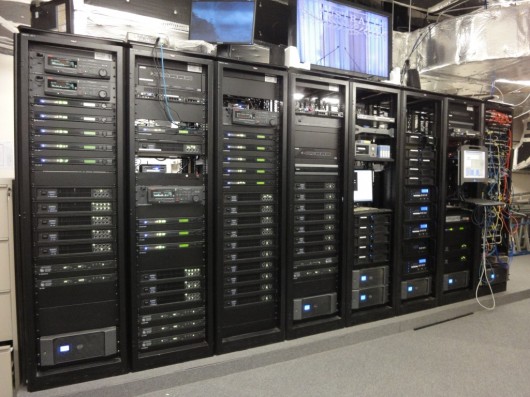 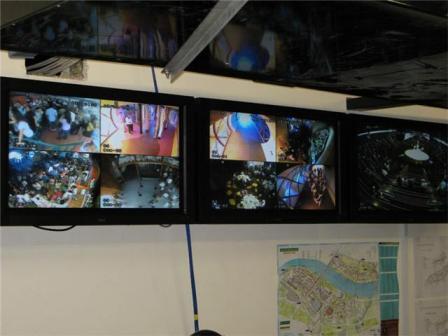 There is much more to the Australian pavilion than its centerpiece, and all of it – and I mean all of it – was given careful, creative consideration. And that careful consideration is ongoing: during my tour, Ford pointed to several items that – based upon three weeks of operations – that would be changed to better meet the needs of the audience. And, frankly, that’s one of the things that I most appreciate about the Australian pavilion: its obvious respect for the intelligence and character of the people who visit it. This kind of respect is more rare than it should be at Expo 2010, so I really do feel that it deserves special mention.

It’s also worth noting that the Australia pavilion, like other national pavilions, was partly funded by corporate contributions. But, to the credit of Ford, his company, and the Australian government, corporate messages and logos never intrude upon, much less combine with, the pavilion’s core mission of presenting Australia’s human and physical resources to a curious Chinese audience.

Congratulations to Ford, think!OTS, and the Australian government for achieving one of Expo 2010’s truly great pavilions. It deserves the long lines that it’s been attracting … see below. 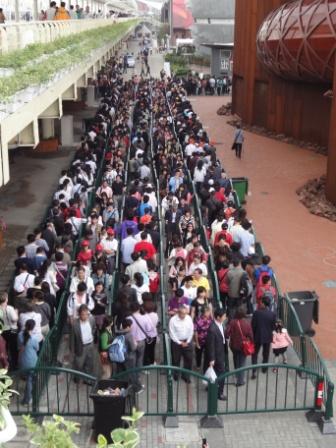 [And special thanks to WY for help with the photos in this post. All but the sixth, and the last three, are hers.]