Say you’re a mid-sized Eastern European country without much of a public image in China. More or less suddenly, in 2006, you receive an invitation from Premier Wen Jiabao, inviting you to attend Expo 2010, the biggest and most expensive World’s Fair in history. You accept, of course – why wouldn’t you want to take advantage of this unparalleled opportunity? – and convene your country’s best minds to decide what, in fact, you’ll do with your national pavilion. You’re not a superpower, so you certainly aren’t going to take the approach of Germany, France, or the UK and (try to) build an architectural masterpiece; but you’re not Albania or San Marino, either, and you’re surely not going to occupy a glorified booth in one of the European group pavilions.

So what you do? Well, if you’re Hungary, you install a two-meter tall silver plexiglass geometric curiosity in the center of a 1000 square meter building and hire a handful of Chinese volunteers to explain what it is. No, really. That’s what they did. Here it is: the Hungarian Gömböc: 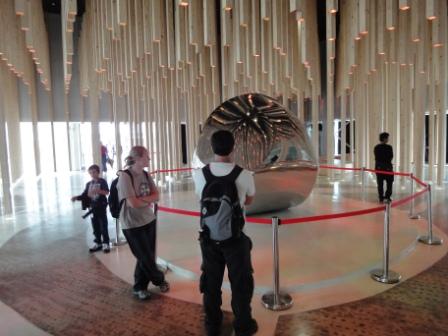 And here, next to the big Gömböc are three volunteers, with several pint-sized Gömböcs, trying to explain – in Chinese and English – just what this thing is to those (like me) utterly perplexed as to why Hungary would construct an entire pavilion around one. 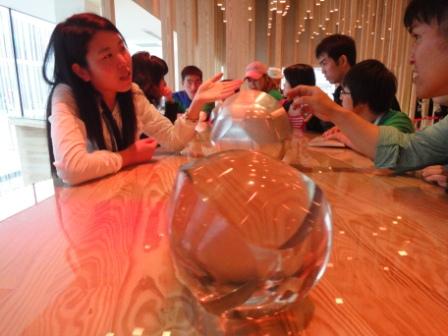 Seriously, and this bears repeating: there is nothing else in this pavilion but that thing, that Gömböc. The display cases? Empty (seriously, they’re empty). No goulash. No Bela Lugosi. No Bela Bartok. No even a hint of Zsa Zsa Gabor. Just. this. orb.

So what is it? Well, according to this article (and there are many, many others) a Gömböc is:

… the first known homogenous object with one stable and one unstable equilibrium point, thus with two equilibria altogether on a horizontal surface. It can be proven that no object with less than two equilibria exists. The discovery of the inaccessible path has led to the idea of GÖMBÖC.

Needless to say, two Hungarians discovered it. In 2006, no less.

There was no queuing for the Hungarian pavilion when I visited it yesterday. Let’s hope – for the sake and safety of the good-natured Gömböc Explanation Team – there never is.

[In other inexplicable pavilion news, the New Yorker’s Evan Osnos collects some early reviews – Chinese and foreign – of the USA pavilion. Worth reading.]

[Clarification: As noted below in the comments: as weird as this is, I actually really like it. Nice change of pace, and the only pavilion that I was still talking about – and blogging about – hours after leaving the grounds. Kudos to Hungary.]