Even before Expo 2010 [the Shanghai World’s Fair] opened on May 1, media, organizers, and visitors were buzzing about the epic lines expected at certain national pavilions. To be sure, lines (queues, my British friends) are reality at all modern Expos. But China, with its vast population, and determination to secure 70 million visitors before its six month Expo ends, magnifies the issue. Nonetheless, despite reasonable concerns about Shanghai lines dating back years, rumors have been circulating for months that “some” national pavilions were built, and have been managed, to ensure and lengthen the lines and waits – for the sake of national prestige.

So. On June 16, at a semi-regular meeting of Commissioners General held at the Expo site, the rumors became thinly-veiled accusations: mid-way through the meeting, the Commissioner General of Turkey all but charged the Saudi Arabian pavilion – notorious for its nine hour-long queues – with purposely manipulating visitors and wait times so as to appear as if it’s popular. His finger also turned to the Germans, hosts to six hour lines, for much the same, and more. Below, the Saudi pavilion as encountered during the Expo’s soft opening, before it became popular. 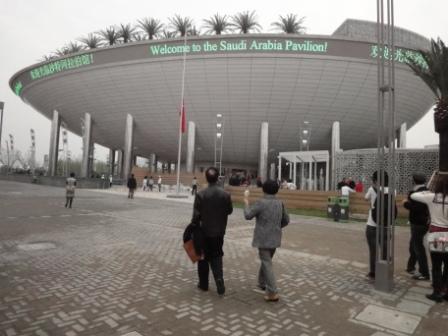 Thanks to an Expo friend, I have documentation of this exchange, in the form of the June 16 meeting minutes. Click here for a scan of the first page, including participants. And here, in the midst of a long section concerning lines, is the relevant passage:

The Commissioner General of Turkey notes that some pavilions are designed for long queues and that even some pavilions want long queues as a matter of prestige. He suggests that pavilions should speed up access at their entrances and allow, as is the case at the pavilion of Turkey, free entrance and exit to shows rather than closing people inside until the show is over. He notes that Turkey receives 45,000 people per day whereas Saudi Arabia is at around 25,000 per day. He also stresses that Germany had faced the same issues at Expo 2008 Zaragoza due to the design of their pavilion.

This blogger notes that Turkey rarely has a significant wait in front of its pavilion, despite the fact that – if the 45,000 figure is correct – it exceeds or equals the visitation numbers at many other popular pavilions, such as the well-queued United States pavilion.

This is a point not missed by the Commissioner General of the China pavilion – a pavilion which receives 50,000 visitors per day via a reservation system. The minutes continue:

The Commissioner General of China notes that in the Shanghai Morning Post an article was recently titled “Not to visit Saudi Arabia is regrettable, to wait 8 hours is also regrettable.” He suggests that the good experience from the China pavilion be used to solve this issue as 8 hour queues are a waste of time for visitors and give a bad experience especially as the weather is getting hotter. If a reservation system exists it will create an even dispersal of visitors throughout the site.

In other words: get with the program, do like China, and set up a reservation system. And if you can’t do it yourself, Hong Hao, Director General of the Expo, volunteered (in the minutes) to do it for you. Take-away message: don’t blame long lines on the Expo organizers. Blame them on manipulative and/or short-sighted pavilions. I tend to agree.

Two days after the June 16 meeting, Han Zheng, Mayor of Shanghai, offered assurances that “measures” would be taken to shorten lines in advance of the mid-summer heat.

Whatever those measure are, the staff at Shanghai Scrap humbly offer an additional suggestion for dispersing the crowds in front of the German and Saudi pavilions: circulate a Chinese translation of the June 16th minutes to Chinese visitors as they arrive at the Expo. I’m pretty sure that they won’t take the news that they’re possibly being manipulated for Saudi and German prestige won’t be taken well.

Queues aside – the meeting minutes aren’t terribly interesting. What they reveal, more than anything, is a large-scale event that’s running rather smoothly. Some problems with hot water here, air-conditioning there, and a bit of discussion about who should be give “easy access” to pavilions. My favorite passage, bar none, is this one concerning whether or not pregnant women should have to wait in pavilion lines:

Pregnant women are very difficult to verify and heavily pregnant women perhaps should not be visiting such an event. Women with babies should also not be given priority as it is not the babies enjoying the event but rather the parents.

And if that’s the scale of the issues being considered, then I’d say that there really aren’t many serious issues at all.