I spent much of the last two weeks in India, and the one that I’m going to share with my readers is a sign that I found in the brand spanking new, much vaunted, Terminal 3, at Indira Gandhi International Airport (the rest of that trip shall remain shrouded in secrecy, occasionally broken on twitpic). Opened in mid-July, the new DEL is – on the surface, at least – a significant upgrade on the old DEL, which – famously – was often compared to a bus station. The place was a dump.

The new DEL is big, clean, filled with technology and efficiency (I beg to differ on the latter point), and the subject of fawning coverage in the international media (here, here, and here), which not only praises the airport itself, but also the symbolic meaning of the airport for an India desperately in need of new infrastructure. So, I’ll admit it: as a travel geek, I was excited to see this new temple of flying. And now that I’ve seen it, I’d like to share with Shanghai Scrap’s readers something that I’ve never seen, anywhere, in any airport, on the planet: 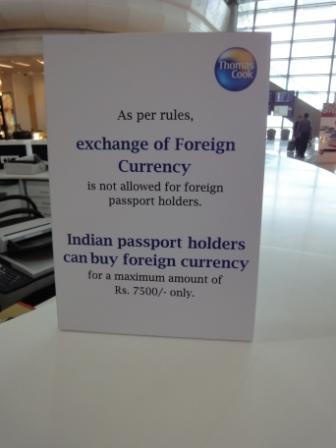 That’s right: a sign prohibiting foreigners from exchanging money in the airport. Or, more specifically, a sign prohibiting foreigners from exchanging money past security. So, in other words, if you’ve cleared security and you still have a wallet full of rupees, you either are going to have to exchange them wherever you’re going, or dump them in the very small handful of concessions operating in Terminal 3. What makes it more irritating, if not offensive, is that Indian passport holders – they can exchange money.

I’m guessing that there’s a commercial motive behind this “rule,” and if so, I’d like to go on record as saying that refusing foreign exchange so that visitors feel compelled to unload their rupees in crappy airport shops is, to put a fine point on it, very bus station-like. But perhaps I’m off on this? Are there other major international airports out there which preserve the right of foreign exchange only for native passport holders? Is there a perfectly good, perfectly reasonable, explanation for this rule that I’m missing? Comments are open.