There seems to be an intense amount of recent media interest in ranking and assessing what makes for a great city. Foreign Policy’s terrific Global Cities Issue (with Christina Larson’s fine profile of Chongqing, Chicago on the Yangtze) is the first to come to mind, but I’d be remiss if I didn’t include Newsweek’s desperate (and pathetic) but still very much related The World’s Best Countries list. Of course, for my American readers, the “best places” phenomenon isn’t new: Best American Cities issues are a veritable cottage industry in American magazine publishing (for example … for Artists! for Working Mothers! for Living). In any case, who doesn’t take an interest in where their city ranks in the eyes of others?

And, if you live in China, this is doubly the case. As anyone who has spent any time in China learns quite quickly, the opinions of foreigners, especially in regard to the development of the country and its cities, is important – and often more important – than the opinion of Chinese folks. To my way of thinking, this isn’t always a good thing: many Chinese, and many Chinese cities, are often too quick to develop in a manner that they think will impress foreigners, rather than in a manner that will impress much less increase the happiness of their own citizens (thus the destruction of old neighborhoods in favor of high-rise downtowns … meant to impress foreigners). So I was more than a little interested when, late last week, I received an invitation to attend the launch press conference for the first “Chinese Cities’ International Image Survey,” held this afternoon (and not yet posted to the web). 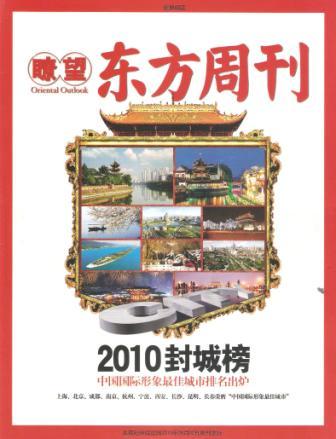 Sponsored and conducted by the Gallup Organization, in collaboration with Fudan University, the Chinese Mayors Association, and Oriental Outlook Weekly (which will publish it on September 2) the survey seeks to assess not what Chinese people think of their cities, but rather what foreigners think of their cities. Specifically, 7,980 foreigners on six continents in one-hundred countries (not including Taiwan, Hong Kong, and Macau), who have spent at least one month in China, were asked to give a 1 – 10 ranking on twelve criteria as applied to thirty short-listed Chinese cities (whittled down from an original list of 260). Not an easy task: Wu Tao, the Chief Consultant for Gallup in China, pointed out that – in the case of some cities – only thirty foreign respondents out of 7,980 had heard of, much less had enough information on, some of the cities in question.

Meng Jian, the director of Fudan University’s International PR Center, explained the survey’s purpose this way: “Too many Chinese cities are focused on hard criteria, and not their personalities. But great cities aren’t remembered for their hard criteria, they’re remembered for their personalities. And too many of our cities are losing their personalities.” This might not sound interesting to those who don’t live in China’s increasingly cookie cutter metropolises, but for those who have – and for those of us who have watched those metropolises destroy their historic, urban cores in favor of bland high-rises – this is nothing short of a revelation. So, rather than be subjected to another rundown of urban rankings based upon economic figures like per capita GDP, this survey looks to rank (on a 1-10 scale) more qualitative facets of Chinese urban life:

[Alas, I may have missed one or two here … get the full run-down in the September 2 issue of the magazine.]

These questions strike me as fascinating on a number of levels, not least of which is that they reveal some of the concerns that Chinese have about their cities, and foreigners – or, at least, Westerners – don’t have about theirs. Specifically, questions one and eleven, related to the quality of residents and the trust between them, strikes me as a particularly Chinese. Put differently (and Detroit aside), I don’t think I’ve ever heard Westerners, at least, evaluate a city on whether or not the people trust each other, much less as to whether or not they are of high quality (yes, high-quality work force, but that’s not what’s meant when Chinese people discuss whether a person is of quality).

But whatever. The respondents answered the questions, and the ultimate rankings are interesting, if not entirely surprising:

As already noted, many of the thirty cities in the survey were recognized by far fewer than 1% of the respondents. So, in that sense, it’s probably not surprising that China’s two best known cities are at the top of the list. On the other hand, I think it’s notable that – for a survey that focuses on foreigners who’ve spent at least one month in China – no cities in Guangdong, China’s manufacturing center, made the top. Surely, a significant percentage of business visitors over the last decade have visited the region. With that in mind, how could dusty interior cities like Changsha and Xi’an have made more favorable impressions than thriving Guangzhou and Shenzhen? Or, for that matter, how on Earth did backwater Ningbo out-poll cosmopolitan Suzhou? Such are city rankings!

So what to make of these rankings? I must admit, I expected the elaborate press conference to trumpet the results as a sign that the ten top-ranked Chinese cities had arrived as Global Cities. But, in fact, the results were used for the exact opposite. Gallup’s Wu Wang Chengyuan, Chairman of the Chinese Mayor’s Association, concluded that he’s “still finding the image of China lacking behind what we expect.” And Fudan’s Meng noted that, despite the fact that “Shanghai rated best among Chinese cities, it’s still far below other Asian cities.” It’s both a humble and a bit insecure response to a complicated data set. But it’s also not surprising. For as long as I’ve been living here, a week has rarely passed where a Chinese friend hasn’t asked me to compare Shanghai (or other cities) with those back home in the United States. This survey, then, is the first and (so far) only effort to standardize that insecure question into something that can measured. And next year, and the year after, it will be repeated, into perpetuity or – at least – until everyone is satisfied that China’s cities have truly arrived as global.

A final thought: wouldn’t it be wonderful and interesting if Gallup teamed up with an American university and news magazine to poll 8000 Chinese on what they think of thirty American cities? Surely, somebody must be willing to pony up the money for such a project?