Starting today, we’re going full-tilt at Shanghai Scrap covering (sort of) the End of Expo 2010. What this means, exactly, I’m not sure. But I do think that – even if the rest of the China-based foreign correspondent corps won’t cover it (more on that shortly) – the end of the largest World’s Fair ever (size, attendance, etc etc) merits some attention. So we’ll start with a brief emailed Q&A that I conducted over the weekend with Zachary Franklin, author of the DeluxZilla blog. By day, Mr. Franklin is an M.A. student inl economics at Fudan – that is, when he’s not busy covering the Expo for the European Union wire service at the Expo. Indeed, during the Expo, Franklin has written – as of last count – 88 wire stories (subsequently picked up news agencies worldwide), and that has to be a record for a foreign correspondent at this event. A compendium of those stories can be found here, here, and here. Below, Mr. Franklin and Prince Albert of Monaco, at the Monaco pavilion (a/k/a Prince Albert in a Pavilion]. 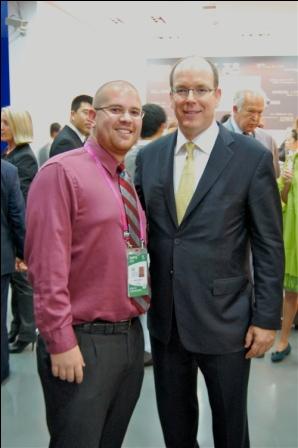 Nevertheless, despite all those wire stories, it’s Mr. Franklin’s blog that sets him apart. Posts like Going Through the Expo Garbage, Expo Fouls Up Three Month Party, and Fighting the Coke Man provide/d readers with a totally unique and informed insight into the life of this Expo; I’d say it was invaluable if you had any interest, professional or otherwise. I’d be remiss, too, if I didn’t mention, that Mr. Franklin once took me to task for my coverage of the USA pavilion (coverage like this). Alas, we’ve never met in person (my fault), but I’m assured by several mutual friends that the blogger is a total mensch. So, without further ado, a few Expo-related questions for Zachary Franklin, aka DeluxZilla:

Scrap: Knowing what you know now, would you say that the Expo was worth the money and effort spent on it? From your perspective, what did and didn’t it accomplish?

Deluxzilla: China showed no prejudice when it invited every country in the world to participate in this Expo. In the final weeks of the Expo, while interviewing several commissioner generals and pavilion directors, the reoccurring theme of the conversation was that had the 2010 Expo been held in any other country, nations would have used the 2008 financial crisis as an excuse to back out. But not with China. Nobody said no to China.

What one also has to realize is these pavilions didn’t just act as displays for a country’s culture, development, history, or how it sticks to the theme “better city, better life.” These pavilions are business centers. They are conference rooms. They’re “temporary embassies.” With more than 240 participants at this year’s Expo, that’s a mind-numbing amount of business, meetings and government visits taking place on various levels over six months. Pavilions such as Colombia and Belgium designated whole weeks on their calendars for different regions from their countries, and invited businesses and leaders to speak and meet Chinese counterparts. The United Kingdom repeatedly stated its main purpose over the six months was to strengthen economic relations between the UK and China, and the smallest part of its presence in Shanghai was the actual pavilion.

The combination of so many countries, cities and global organizations all in one place at the same time is a very persuasive excuse for small and medium size businesses to look at a market they might have previously had reservations about entering, for bigger companies it might be to find ways to strengthen market share in China — with so much going on inside the Expo, it’s very hard to synthesize all the different elements that have taken shape for countries over this last half year.

You’re going to see the success of this Expo start to play out in the coming year, as pavilions begin analyzing what has transpired over these past months. Ultimately, what the Expo did was to lay the foundations for China’s economic relationship with the world over the coming decades.

Scrap: You and I disagree (or disagreed, I don’t know) on the relative success of the USA pavilion. Without this sounding like a leading question – as someone (an American someone, at that) who has visited every Expo pavilion, and seen and felt audience reactions to them, how would you rate its success or failure?

DeluxZilla: You’re not going to find a single pavilion at this Expo walk away saying they failed. Every pavilion had some measure of success. Some pavilions wanted visitors going home knowing where the country was located on the map, other pavilions created extensive cultural and business programs for six months.

The USA pavilion gave me my best memory of the Expo. For its Expo national day, the University of Southern California Trojan Marching Band played inside the Expo, marching in the street from the Africa zone to the China pavilion. I graduated with a BA in print journalism from USC in 2007. That day at the Expo, I took off my shirt and tie, put on my USC football jersey that I’d brought specifically to the Expo that day, and marched alongside my alma mater’s marching band. I will never forget that experience. 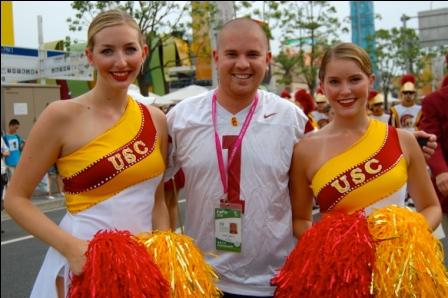 Scrap: It’s hard to cover something intensively for six days, much less six months, without it having an effect on your perceptions and opinions. So I wonder, did all of that time at Expo do anything to how you view China/Shanghai?

DeluxZilla: I was struck by just how far China is reaching out to the rest of the world. After the first few weeks reporting for the European Union, and watching just how many government officials and business leaders were coming to the Expo to talk with the relevant Chinese parties, I realized China was getting something from everyone at this Expo. It could be as simple as increased visas issued to Chinese as a result of a pavilion’s popularity or it could be the investment of billions of dollars in infrastructure over the coming decades. Every country had something to offer China during these six months.

Scrap: I’ve been meaning to ask – just how many foreign leaders and dignitaries did you cover? And two related follow-ups – do any of those visits stick out, and if so, which one? And finally, did you ever get the sense that – from the perspective of the Chinese hosts – this was becoming tiresome?

DeluxZilla: As a reporter for the European Union, it was my job to cover EU member states’ Expo pavilion days, which saw a leadership group from that country come to the Expo. After 27 Expo national days, that’s about half dozen presidents, another half dozen prime ministers, royal family members and about a dozen ministers. If you include conferences, other Expo pavilion days I managed to attend and just the sheer number of delegations that came over these past six months, I’ve met several hundred people who play a vital role in running a country’s government or a multinational corporation.

For me, the most important person that came over the past six months was Prince Albert II of Monaco. The house where I grew up in Philadelphia is directly across the street from where Princess Grace Kelly (his mother) was raised, and after I found out in early May that Prince Albert II would be coming for Monaco’s Expo pavilion day, I made sure to attend those events and meet the prince. I spent about 30 minutes talking with Prince Albert II about growing up in Philadelphia, rowing — which is big in Philadelphia and a sport the Kelly family is deeply involved in — coming out to China, and reporting for the European Union at the Expo.

Scrap: I may be wrong about this, but I’ve sensed that, as the Expo wore on, your blog loosened up a bit. And by that I mean you seemed to become more comfortable discussing events and situations that are – how to put this – “sensitive” in the eyes of the Expo Bureau and your employers. Am I right about that? And if so, what changed?

DeluxZilla: In looking over DeluxZilla, I am upset about my updating over the past several weeks. With the Expo winding down, I ramped up my coverage for the European Union, and I have not had enough time to post on DeluxZilla as often as I’d like. What posts do you consider more sensitive? My ruminations on taking LSD and the pavilions to visit? Have you ever read Hunter S. Thompson?

[ed. note: The Staff of Shanghai Scrap has read Hunter S. Thompson, and we find much of his shtick tiresome (though not, we must add, Mr. Franklin’s post, which we enjoyed immensely, though we’re sure the Expo Bureau wouldn’t). As new journalism goes, we remain partial to Tom Wolfe.]

Scrap: Just how big, how gaping, is the hole in your life come November 1?

DeluxZilla: Quite the contrary. As I am a second-year graduate student at Fudan University working towards a master’s degree in economics, I transition right into writing my thesis. I spent the first six weeks of the Expo balancing the completion of the spring semester and reporting for the European Union at the Expo, and since school began Sept. 1, I’ve been keeping up with my studies as the Expo comes to a close. I don’t have a break until graduation in July 2011.

[Below, Mr. Franklin in a photo with “the woman who represented Spain during the Miss Expo 2010 competition.”] 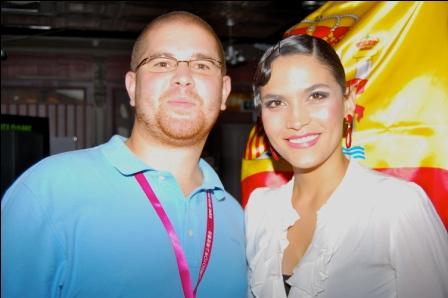 [All images provided by Zachary Franklin of DeluxZilla]