Recently I was asked by a reporter, recently assigned to China, what China blogs I read. In fact, I look at several, and the full list can be found on the blogroll to the lower right. Then he asked me if I have a favorite. That’s a tough question: different blogs fulfill different functions. For example, I read danwei and shanghaiist like maps, using them to help me chart what’s happening in China, and on other China blogs. But if the function that we’re talking about is pleasure, then I think no blog brings me more enjoyment than Sue Anne Tay’s Shanghai Street Stories.

Full disclosure: Sue Anne is a friend, and a colleague with whom I’ve worked. But even if I didn’t know her, I’d pay tribute to her photos, and the text that she writes to accompany them. As regular readers of Shanghai Scrap know, I’m a big fan of reported blogs, and Sue Anne’s is one of the best: rather than riff on what other writers or bloggers have already done, she provides her readers with gorgeous photos and original commentaries on what’s happening on, well, Shanghai’s streets. In this way, she’s done some of the very best and most interesting blogged work on urban preservation in Shanghai, and doing so without being didactic about it. She is, in the best sense of the term, a promoter of the “show don’t tell” ethos. And what she shows! Below, an image of the artist and blogger at work, taken by Xi Zi. 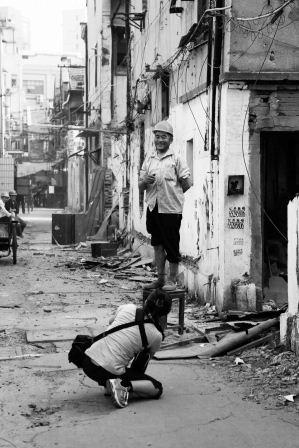 I’ve long wanted to do an interview with Sue Anne for this site – partly because I’m a straight-up fan, and partly because I think she deserves a much wider audience. And so, without further commentary from me, Sue Anne Tay on her photos, her blog, doing creative work while holding down a day job, and where she’s going next. For more info, go to Shanghai Street Stories.

Scrap: I think one of the striking things about your photography is that it doesn’t seem to have any connection whatsoever to your day job. By day, you work in a very traditional office environment; but when you get out of that office environment, you photograph situations and people who couldn’t be more remote from Liujiazui’s office towers. Is that just coincidence? Or does street photography have some relationship – negative or positive – to the fact that you aren’t on the streets during the day?

Sue Anne Tay: People have actually asked me if I roam the streets collecting stories on a full-time basis. It’s a nice thought but as you pointed out, I have a day job as a researcher in a financial institution.

I don’t think there is a disconnect between my day job and photography. It’s both about delving for answers and documenting them, which I enjoy, but using different mediums. One is through writing about economics/finance at a macro level, and the other is through story telling of urbanization at the micro level. Granted the latter allows more creativity in prose and concept. Yet, for me, the two reinforce each other by putting a lot of issues into perspective. 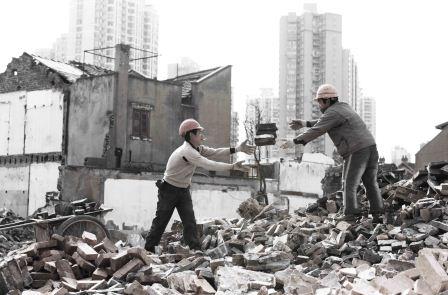 I don’t shoot in the streets as much as I would like, but since picking up the camera, I look at the world through an imaginary viewfinder. Every detail can trigger a narrative your head.

Scrap: There’s a great tradition of serious artists holding down day jobs and benefiting as artists (and as wage earners!) from that status. A friend of mine, a painter in Beijing, told me that the worst thing she ever did was quit her day job and begin painting full-time. She said that, abruptly, painting stopped being “play.” Do you think something similar might happen to you if you were to become a full-time photographer?

Sue Anne Tay: To a certain degree. Right now, I enjoy the luxury of cherry-picking client assignments and pursuing a myriad of personal projects. I’m focused on exploring different styles and topics, collaborating with other photographers and artists etc. The aim is to improve my photography and writing without the stress of forcing it into a business.

To go full time, you have to strike a good balance between your artistic agenda and client management. No job is perfect and whatever area of photography you pursue, it’s a very tough business which hasn’t really recovered since the global financial crisis hit. Should I transition toward this full-time, I’d be sure to prep a good foundation to minimize any disparity in expectations. That’s the best I can come up with at the moment. 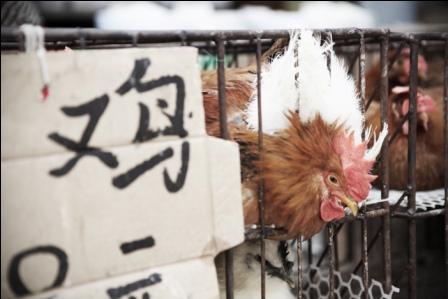 Scrap: Do you consider yourself a street photographer in the traditional sense of that term? Your tweets and writing indicate that it’s a genre that interests you. But it also seems to me that you occasionally move beyond it.

Sue Anne Tay: Not really, I consider my work a mix of photojournalism and street photography. The former allows me to cover a wider gamut of topics such as old architecture, individual stories, lifestyle, while the latter is indicative of a style of photography I sometimes prefer.

Photojournalism engages the subjects directly with an intent and purpose, often focusing on an issue. In contrast, there is little or no interaction between the subject and photographer in street photography but the result should reflect witty composition and poetry of motion. Just look at the works of Trent Parke, Elliot Ewitt and Moriyama Daito. It’s good training and relies less on your equipment and more on creativity. 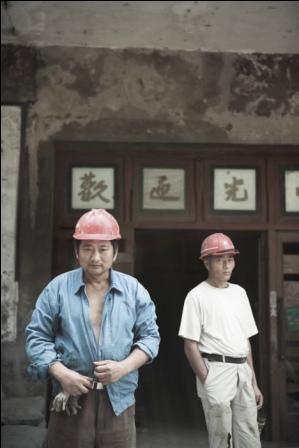 Scrap: I recall that you were hesitant to both blog and tweet. I wonder if you could explain why and what changed.

Sue Anne Tay: While I enjoy reading blogs, it didn’t make much sense for me to start one if I did not have an interesting point to make. I initially posted my photos on Flickr with the aim of learning from other photographers and only later dabbled in prose. After several months, the themes came into themselves and given the positive feedback I had on my work, consolidating it into a blog suddenly made sense.

Regarding Twitter. I felt it to be a huge echo chamber, especially if you follow a huge group of China watchers. But I was proven wrong. It is a great source of news (I use that loosely, more like public service announcements but nevertheless useful). More importantly, it has become a great channel to follow photography related updates, in a more succinct manner than a blog roll or Google Reader. 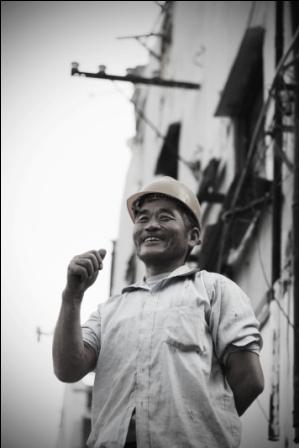 Scrap: Shanghai Street Stories is really unlike any blog in China – Chinese or foreign language. You avoid politics, headlines, and opinion and instead focus tightly on reporting precisely what you see. To my mind, that’s one of the reason it’s been successful. With that in mind, I wonder if you could explain how you conceived of it. Unlike many blogs, it seems to me, yours came out fully formed from the first post. You seemed to know exactly what you wanted to do. Is that the case?

Sue Anne Tay: As I mentioned previously, my work went through an incubation phase via Flickr before its blog form. Overtime, some stories have become longer and more issue-focused with photo essays versus a single photo.

I would like to clarify that I do not shun politics or opinions due to a lack of my own. It is just that I find it more informative to present situations and people’s lives without judgment or clichés for readers to form their own opinions. That people in the neighborhoods are willing to let you into their lives and talk to you is a privilege, and it takes time to build that trust. They don’t deserve to be manipulated into a socio-economic thesis. After all, the stories are more about them and I prefer the content to be a bit timeless.

It took me almost 6 months to come to terms with how I feel about the contradictions of urbanization in Shanghai, mainly because I compare and contrast a lot with other cities I’ve lived in including Moscow, Baku, Singapore, New York, Washington DC, Los Angeles and London. The verdict is still out but I’m developing a more coherent tone on how urban policy should be carried out in Shanghai. It remains a manifesto to be penned. 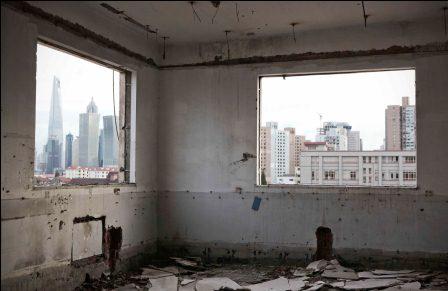 Scrap: Unlike almost any other photo blog I’ve ever encountered, your blog has text – extensive, well written text – that not only adds something to the photos, but also engages readers. I think of the “Echoes and the Sound of Broken Glass” post, for example. Why choose to write instead of just allowing the images to speak (a choice I’m glad you made, by the way)?

Sue Anne Tay: I was more of a writer before coming into photography. The first instinct is to evoke details and emotions through prose, the photo satisfyingly completes the story. Overtime, they become vital to each other. Some might say it’s too much information, but I enjoy being thorough.

The text and photos also do not necessarily complement each other in a traditional way. Take the post “Echoes and the Sound of Broken Glass.” I actually drafted a long post on the history of the old lightbulb factory, originally owned by the joint venture with Philips. But somehow, it morphed into a long footnote on exploring old buildings. I think it is because my father had called me just as I was hiking through the flea infested building, he asked me why in the world I would do that. I get asked that a lot in general. I guess the post was a sub-conscious response.

Scrap: Your blog avoids politics and social issues. And yet, street photography has always been political, and it seems to me that the act of photographing them can be interpreted as a commentary on social inequalities. Does that ever enter into how and why you photograph?

Sue Anne Tay: The blog doesn’t avoid social issues, its content is in itself a subtle interpretation of society and hence its politics. Such as the posts “Small town Shanghai: who’s left?”  or “The street that became a gulf” which illustrates the rift between Shanghainese and migrant residents on a single street. But the blog is more than just about “issues”, it has other aspects that can be simply appreciated for the moment it is in, such as the street photography in “Take to the street.”

At the end of the day, I try not to get too existential about how and what I shoot, just what interests and amuses me. My job is to present them elegantly and meaningfully.

Scrap: Initially, at least, I think many people associated your work with the demolition of historic architecture and neighborhoods in Shanghai. Certainly, your early blog posts seemed to focus on that subject. But recently, you’ve branched out a bit. I think of the wonderful skateboarding photos and posts, for example. Do you see yourself branching out into more modern subjects? Or was that always the intent? Where’s your photography going?

Sue Anne Tay: Thanks for pointing that out, that skateboarding post was very popular! A Canadian historian/ skateboarder old hand who wrote an academic essay on the evolution of skateboarding culture in Shanghai, even contacted me. You have to love the connections people make via blogs. 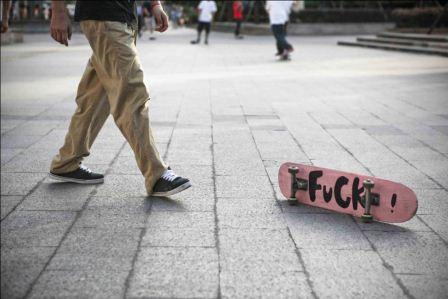 I’m trying to capture other aspects of Shanghai though many folks, especially expats, like to focus on the tragedy of disappearing neighborhoods. For all its flaws, Shanghai is so much more than that and I hope to unveil the city and its dynamism in varying ways.