In my near decade-long association with China I have never witnessed something so remarkable or so moving as what I witnessed today, on the evening of the traditional seventh day of mourning, in the aftermath of the fatal Jiaozhou Road fire in Shanghai. My readers in Shanghai, and China, are already familiar with this event; for those outside of China, and not following the event and its aftermath: on Monday, a 28-story high-rise burned, and at least fifty-six people died as a result. Video here, a live blog here, and an excellent New York Times piece examining questions raised by the fire here. And finally, and best-written of all, a blogged dispatch, “Don’t Cry, Shanghai” by my friend Marta Cooper.

Around 2:00 this afternoon I was with two friends when one received a call notifying us that thousands of people were converging on the site of the fire with flowers. I hesitated to follow, but only for a moment: I’ve lived in this city, and among its people, for years, and I consider it and them as much home as anywhere I’ve ever been. I decided to go, but as a mourner for what happened in my home, and with flowers. When we arrived we came upon a line that stretched for blocks. Below, a photo taken while looking back, after having turned a second corner: 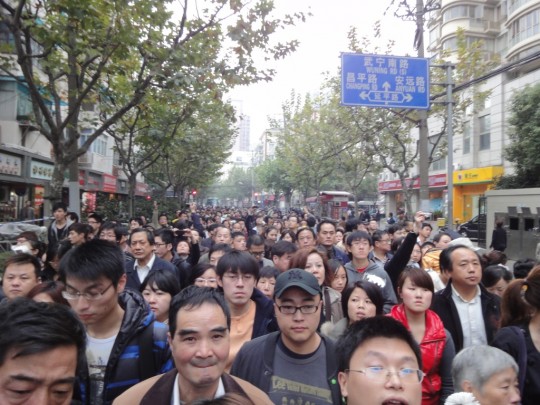 What this photo doesn’t show, because of the vantage point, are the bouquets of flowers carried by all of those mourners. I think it’s no exaggeration to suggest that at least half of these people were carrying carnations. As for those who weren’t, they were reverent and quiet. I did not sense gawkers, rubber-neckers, or the Sunday curious.

What I did sense, what I will not forget, was the rhythm to this procession. For the last long block, as the procession slowed, we began this odd stutter-step: we would walk five or six steps, and then we’d come to a dead stop, pause for ten seconds or so, and then start the cycle against, five, six steps. Nobody said anything, nobody was pushing ahead – rather, the crowd seemed to accept this odd, almost reverential step. As we moved slowly along, it took on a life of its own, almost like a mourning dance. I’ve never experienced anything quite like it. I wish i could explain it. But, when we reached the intersection beneath the burnt-out building, there was nothing and nobody directing this movement – we just flowed into what felt like a sacred space, with a brief admonition – quite right – that I should remove my hat before proceeding further. I laid my flowers atop a pile of thousands of bouquets, extending in two directions, for two blocks: 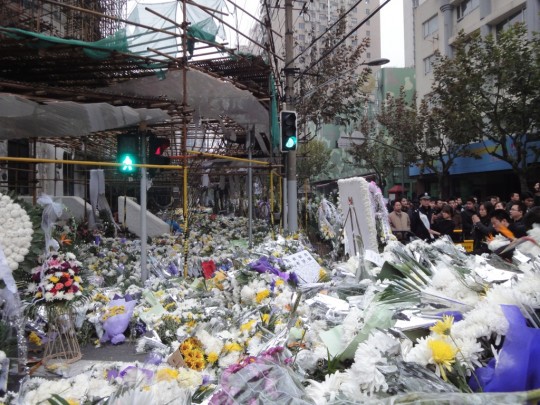 After the page jump, a brief note on the security and how one news organization covered it badly …

I think it no exaggeration to suggest that there were easily hundreds of thousands of mourners at the site this afternoon. While I was there, at least, they were reverent and low-key, interested in little more than showing respect for those who perished. Understandably, police were deployed throughout the neighborhood to help control the flow of the crowds, and they did an excellent low-key job. Below, a police set up to prevent people from flowing directly to the building, but rather around it, in the aforementioned procession. 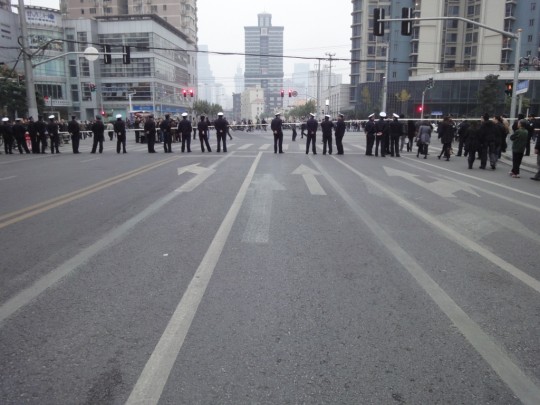 During my time at the event, the police were low-key, helpful, and non-confrontational. They were also quite obviously scared by the large, emotional crowd, and dis-inclined to do anything that would upset it. This was a group of mourners, but it was quite clear that any effort by the police to interfere with their grief would result in push-back and, quite likely, worse. So it comes as quite a surprise to read the AP’s account of today’s events – especially the second graf:

I’ll be blunt: the incident described in the AP story was either made up, or isolated. ANY effort by the police to strong-arm at Jiaozhou Road would have set off a riot, no question. The police clearly knew this, and thus, wisely, allowed civilian volunteers to handle the mourner traffic in front the burnt-out building itself. For images of the peaceful interaction between the civilian volunteers, see this image via Christine Tan’s twitter feed. No blue uniforms; shame on the AP. [UPDATE: Rebecca MacKinnon, nobody’s softie when it comes to heavy-handed Chinese police action, had a non-eventful visit, minus flowers, too] And, while we’re distributing shame, shame on whoever (…) is preventing people in China from seeing online video and commentary about the fire. It’s theirs; they have a right.

[UPDATE 11/22: In comment #5, below, my friend Duncan Hewitt of Newsweek takes issue with my characterization of the AP story as “shameful.”]