[Traveling for the next couple of days. May be difficult to reach. So, before I go, a light post on a light topic.]

A couple of months ago That’s Shanghai ran a lovely, well-written piece on Zha Peihua, a middle-aged maker of small model bicycles constructed from bits of scrap wire and rubber tubing. According to the article, he works from his home, and from the back of his custom tricycle. Anyway, as regular readers know, I’m interested in anybody who makes anything from scraps – rubber, copper, whatever – and so I was absolutely delighted when, the other morning, I ran into Zha on my street, surrounded by several curious children to whom he was showing his bicycles – and a laminated copy of the article about him from That‘s. 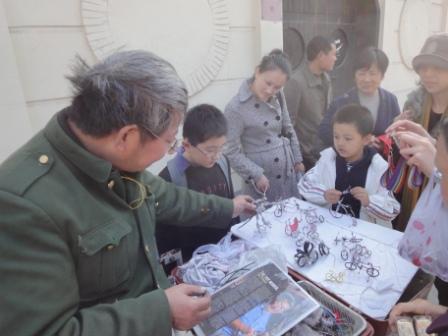 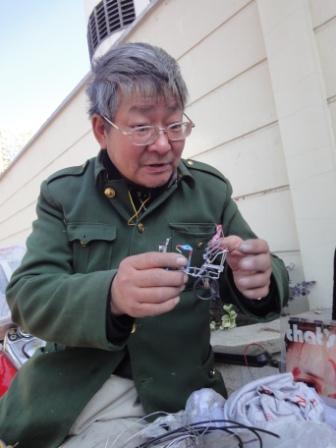 Shanghai being Shanghai, he was also soon approached by a couple of elderly cynical hags who accused him of buying his bicycles from others, and passing them off as his own. He seemed much less bothered by this than me. But anyway, in his defense, after the page jump, his tricycle work table and scrap inventory.

And for good measure, the bicycle that I bought.