Here’s a form of gainful employment that never occurred to me before Friday afternoon: cleaner of the world’s largest urban scale model. I came across him – them – during a visit to the in-need-of-a-better-name Shanghai Urban Planning Exhibition Center, and epic model of Shanghai in 2020. 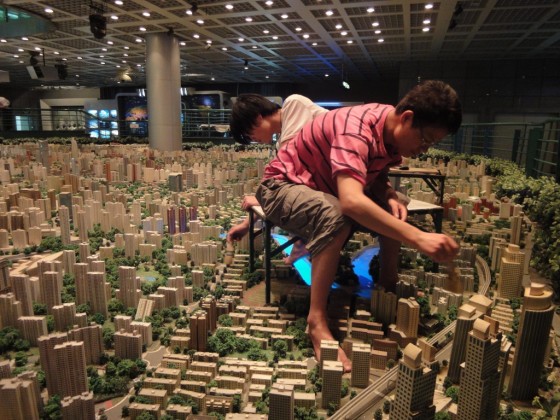 I’ve been taking out-of-town visitors to the model for years, and inevitably two questions arise during those visits: 1) how do they put new buildings onto the map;, and 2) how do they clean it? I’d long assumed that the modular panels which constitute the hockey-rink sized model were removed, from below, for those purposes. It never would’ve occurred to me that twice per year a small team wanders the map, barefooted, repairing, replacing, and cleaning. 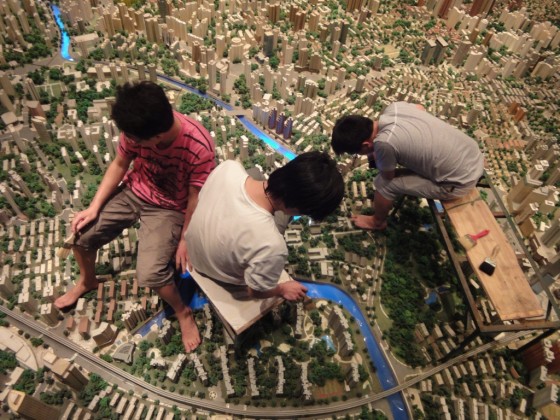 According to the diligent  young men assigned the tedious work of cleaning the map, dusting only occurs on the edges – that is, areas visible to visitors. They work with paint brushes (above), sweeping the dust into the rivers and highways, where it awaits the clean-up man and his War of the Worlds-like vacuum cleaner (below) … 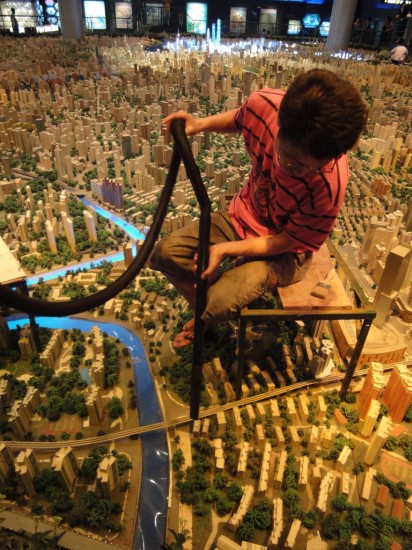 An obvious hazard of the job – from the map’s perspective, at least – is the possibility that the city will be trampled under (bare) foot. One of these young men, when told (by one of my companions) to be careful of the foliage that he was trampling, responded: “We don’t worry about the trees. It’s the buildings that are important.” 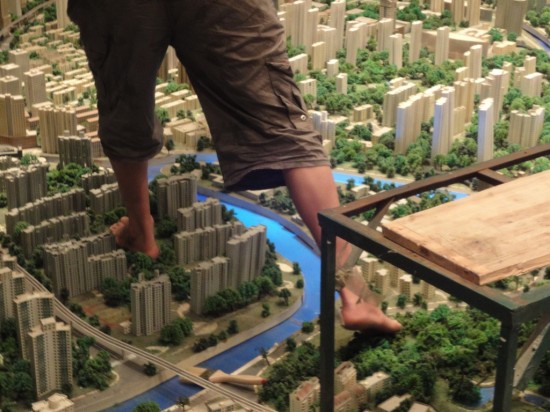 During the 45 minutes or so that we spent with these cleaners, and their map, the most striking thing – for me, at least – was how real – literally, real – it was to those who care for it. My favorite moment was when an irritated supervisor pointedly told one of the workers: “Hey, be careful of Pudong South Road!” Not “that small toy road,” or “over there,” but “Pudong South Road.” Proof, if any was needed while gazing at a map that could only be produced with some crazy mixed in, that somebody really cares (and for the record: I care). Below, a worker carefully placing automobiles into a parking lot beside the Nanpu Bridge. 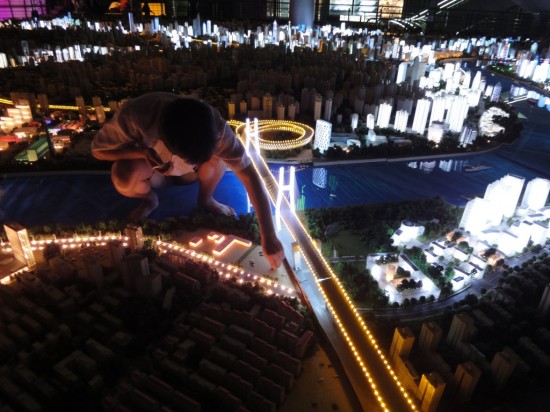