[UPDATE 10/19: Half the way down, you’ll find a clarification regarding the dignity of trash collection v. scrap peddling.]

The image, below, is likely one of the most recognizable in China, today – especially if you have a computer. It’s a screen grab of a video showing Yueyue, a 2-year-old toddler in Foshan, a highly industrialized city in Guangdong Province, on the verge of being run-down and repeatedly run-over by a truck driver, then ignored by more than a dozen passing adults. It’s shocking and demoralizing footage that – among other things – perfectly illustrates China’s so-called “good samaritan problem.” 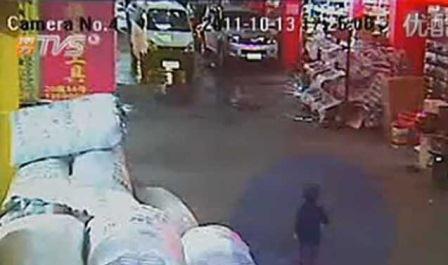 I must admit, however, that when I first saw the image I noticed – and continue to notice – something else: the large white sacks in the lower left-hand corner. They contain recyclable materials, packed and ready to be shipped, a fact immediately obvious to anyone who’s spent any time around China’s thousands of scrap recycling markets (I’ve spent hundreds of hours in them). No surprise, the Nanhai district of Foshan – site of the Yueyue tragedy – is one of the world’s recycling capitals, home to dozens of recycling markets, hundreds of formal recycling companies, tens of thousands of small-scale recycling businesses, and perhaps hundreds of thousands of small-scale scrap collectors – like Chen Xianmei, the pedestrian who stopped to help Yueyue, and who is now being described, widely, as a “trash collector (for example, here, here, and here).”

So: in the video, we see her approach Yueyue with a large white bag slung over one shoulder, and what appears to be a smaller handbag of some kind in her right hand. I don’t know what’s in either of those bags, but based upon the picture, below, taken of Yueyue’s parents bowing to Chen after the accident, and the open sack of used clothes in the background, I’d guess that she was carrying lightweight rags. A Chinese media report indicates that Chen is from Qingyuan (one of the world’s copper recycling capitals, north of Foshan), and that she collects screws and other metal in the market to make extra cash. That is to say, she’s a rag collector, a scrap peddler, a recycler. And, on the day that she happened upon Yueyue, she was walking through the market, collecting whatever rags had been discarded by others, or been lost in the process of shipment. 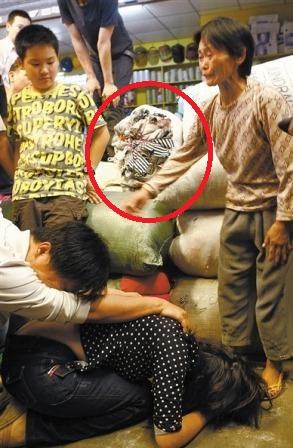 I’ll offer a couple of reasons. First, Chen’s dignity. The term trash collector implies a number of things, not least of which is that Chen is paid by others to pick up trash. After all, nobody picks up trash for free. But, in fact, Chen, and the millions of Chinese like her, are independent businesswomen who pick up recyclables for cash. That is to say, Chen supports herself, based upon her ability see and recover value where others only see “trash.” She’s nobody’s low-priced scavenger; she’s her own woman. Now, that’s not to suggest she’s living an easy life. But it does suggest dignity – dignity that’s denied when the term “trash collector” is thrown around, especially in China.

[UPDATE 10/19: In the comments, below, and via twitter, several people have suggested that the paragraph above implies that trash collecting isn’t dignified work. Reading over it, now, I see their point. Just to be clear: that’s not the point that I intended! Rather, I was hoping to point out two things. First, that “trash collecting,” as a term, is used to denigrate scrap peddlers (and not just in China), especially by those who don’t, or won’t, understand the profession. And second, that the circumstances under which most scrap peddlers work is quite different than the circumstances under which trash collectors work. In many if not most cases, scrap peddling is a desperation profession, what one does when one can’t obtain formal employment (like trash collecting). But that by no means was meant to imply that one profession is dignified, and the other is not.]

Second, context. The market in question has been described in the foreign press as a “hardware market,” and Yueyue’s parents have been described as owning a hardware store. Based upon video of the store, it’s obvious, to me at least, that what they actually have is a used hardware store where locals buy old, sometimes refurbished equipment. Where does that equipment come from? Some of it is imported (Japan is a major source). And, increasingly, some of it comes from the Guangdong area (as China becomes rich, it wastes). It’s the kind of business that migrants, with a little entrepreneurial instinct, can and do get into on a regular basis. With a little hard work, they can do well in it. But – and this is important – it’s only a few steps removed from what Chen Xianmei does. That is, Yueyue’s parents scavenge for re-sellable hardware; Chen scavenges for rags, screws, bolts. It’s a cut-throat, bare-knuckles business, capitalism stripped to its very bones. Lots of people fail, and lots of people try not to fail. It’s not always a very nice business, to be honest, and I can’t say that I’m surprised in the least that an incident like this took place in and around one of its markets.