Several months ago I had the opportunity to travel to the notorious southern Chinese e-waste recycling hub of Guiyu. It was an interesting visit during which it became apparent that many assumptions currently held about e-waste processing in China are no longer current. Of these, perhaps the most important is the blanket assumption that foreign e-waste is the primary cause and driver of Guiyu’s – and China’s – continued role as a global e-waste hub. By and large, that’s no longer the case.

Reporting that I did in Guiyu, and elsewhere, indicates that fully half of the e-waste currently being processed in China is generated in China. American and European e-wastes, meanwhile, are a declining percentage of the overall level of waste being processed in the area, while Southeast Asian e-waste – specifically from Thailand and Malaysia – becoming the fastest growing contributor.

More interesting, still, was evidence that Guiyu is no longer just a destination for old household and commercial computers no longer wanted by their owners. Rather, it is a destination for unwanted parts and defective materials used in the manufacture of new computers and other electronic equipment, as well as materials returned to manufacturers for warranty repair. In one storage warehouse, along, I found boxes of unusued and perhaps defective computer parts marked with the brands of Panasonic, Advanced Micro Devices, ATI Radeon, Samsung, and HP. In the latter two cases – HP and Samsung – I was able to obtain photos of bar codes attached to waste components (in the case of the former) and boxes of components (in the case of the latter). Below, a photo of the warehouse in question. 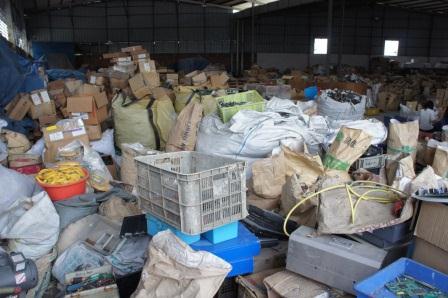 The purpose of my visit was to gather material for a chapter in my upcoming book on the global scrap trade (to be published by Bloomsbury Press in 2013). I’m interested in a number of questions, not least of which is figuring out why some scrap/waste materials move from Point A to Point B, rather than from Point A to Point C. Thus, after returning from Guiyu, I reached out to Samsung and HP with a very specific request. I would happily provide them with the bar code photos that I obtained in Guiyu in return for a promise that they would share with me how material with their respective brands ended up in one of the world’s most notorious environmental disasters. That accounting would not have to include proprietary information, but rather just a general accounting along the lines of: “We sold the material to a recycling company in Singapore which then turned around and sold the material to a Chinese e-waste broker.”

After stringing me along for several months, Shelby Watts,  a spokesperson with HP, finally sent me an email which contained the following message:

“As a policy HP does not participate in books and unfortunately I won’t be able to provide you with comment beyond what is publically available in our Global Citizenship Report http://www.hp.com/hpinfo/globalcitizenship/environment/product_reuse_and_recycling.html and in our e-waste policy  http://www8.hp.com/us/en/hp-information/environment/goals.html.”

It’s worth noting that the two links included in Watts’ email detail HP’s commitment to preventing the flow of e-waste to the developing world. In any case, I have had no further communication with HP.

In contrast, Samsung asked that I flat-out turn over the bar code images to them so that they could resolve the matter. However, they repeatedly declined to provide me with any information that might emerge in their investigation. More so than any other company I’ve worked with in the course of writing this book (and I’ve worked with many, including publicly-held companies), they personalized the matter in a rather nasty way, and finally cut off communication to me with this message:

” … your main priority seems to be your book, while ours is to investigate and resolve this matter.”

Samsung, it is worth noting, is an e-stewards enterprise member – that is, it has publicly committed to using e-recyclers certified to the very strict e-steward standard for waste electronics. Among the many requirements accepted by e-steward recyclers, is a commitment against export of e-waste to developing countries. Let me be clear: I have no evidence that Samsung directly exported the material I found in Guiyu. It’s quite likely that one of their customers exported the material, or – perhaps – Samsung sold the material to a recycling company that claims green standards, and then turns around and exports to Guiyu. Thus, when I contacted Jim Puckett, Executive Director of the Basel Action Network, an e-waste watchdog organization that developed, implements, and oversees, the e-steward standard, his comment was cautious: “It’s interesting and warrants further investigation.”

I think that’s a reasonably cautious approach to this very ambiguous matter.

[UPDATED: However, when I offered Puckett the opportunity to publish my images to the Basel Action Network website, with the goal of hopefully obtaining leads to determine who or how the material in question moved to Guiyu, Puckett stopped communicating with me. It is worth noting that Samsung is a paid, founding member of Basel Action Network’s e-stewards enterprise program. Fortunately, the BBC was not nearly so cautious as Puckett. You can find their story on this matter, here.]

So, below, readers will find images of HP and Samsung-branded waste electronics that I took in Guiyu – including images of bar codes and serial numbers. If you are an employee of Samsung, HP, or a recycling company that may have handled that material, and you have information on how it may have ended up in Guiyu, I would like to hear from you. All communications will be treated confidentially unless you specifically authorize me in writing to release your name. I can be reached through this contact form. If Samsung or HP would like to comment further on this matter, and these images, they know how to reach me. I’d be happy to publish updated information on this blog, and in my book.

Reporters and NGOs who might choose to follow-up on these images on their own are requested to cite them as obtained from “Adam Minter, author of the Shanghai Scrap blog.” For further inquiries of HP, you should contact Shelby Watts at shelby.watts@hp.com. She can be reached by phone in the United States at 650 862 6181.

For Samsung, you should contact Jason Kim of the Global Communications Group at jaeyun79.kim@samsung.com. He can be reached by phone at 82-2-2255-8276. For reasons that escape me, Samsung uses the Edelman PR firm in the US to facilitate (ie, complicate) its communications with reporters. They are nothing if not unhelpful, but if you have time to kill, you should reach out to Adam Yates at his Samsung address, a.yates@samsung.com.

So let’s get to the images.

A box of hard drives. 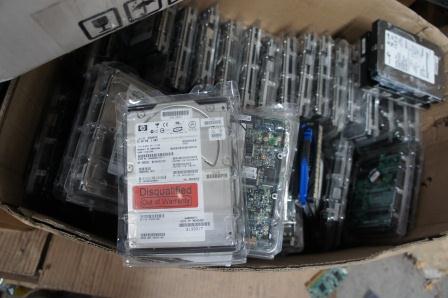 A high-res blow-up of the drive at the center of this photo – complete with bar codes – can be accessed, here.

A second box of HP drives: 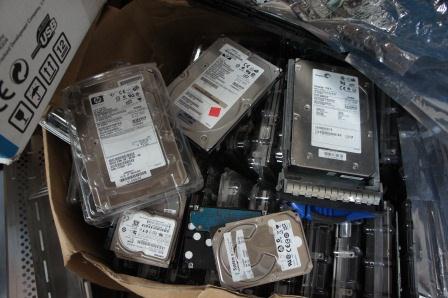 A high-res scan of the drive at the left of the box, available here. 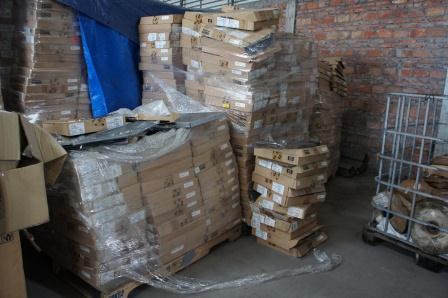 A high-res crop of one a bar code located on one of the boxes, here.

Next, Samsung. A box of semi-conductors branded as Samsung material (and that’s my Sprite bottle atop them): 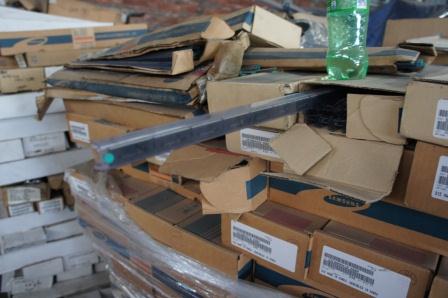 A high-res crop of an image in which a serial number is clearly readable, here.

As for Panasonic – I was unable to obtain bar codes or serial numbers. However, I did manage to obtain a hand-written service tag labeled “Panasonic Avionics Corporation” in Singapore. Calls to that facility, and Panasonic headquarters, have not been returned. The item in question was a monitor, as show below. 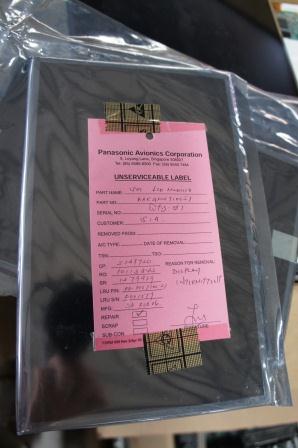 An enlargement of the service record is available here.

I want to emphasize that my interest in this material is for my book, and developing an understanding of just how waste/scrap materials move around the globe. My instincts – based upon other reporting – suggest to me that this material was all sourced out of Southeast Asia, and was likely sourced by the same broker. Did the various companies in question know that they were selling their material to somebody who would send it to Guiyu? That’s a question I’d very much like answered – though I don’t expect that I will succeed in getting one. Still, any help – and again, confidentiality guaranteed! – will be very much appreciated.