On Friday afternoon I logged into my twitter account and was promptly informed that my account had been suspended. I’d been given no notice, no warnings, no indications whatsoever that something might be amiss (for the record: I am not a spammer, an account churner, or a follow-back participant; I don’t engage in personal attacks). Rather, the account was just summarily suspended, and that was that. I was offered a link to a page with possible explanations for the suspension, and a form that I could use to appeal the suspension – which I promptly did. 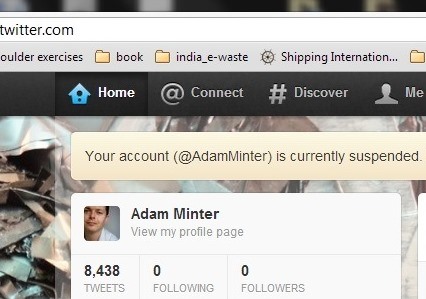 So far, nobody from twitter has gotten back to me with an explanation, absolution, or further punishment. Of course, twitter isn’t a government, and they’re under no obligation to follow any kind of due process in such matters. But for twitter users like me, who have woven the service into their daily routines, the capricious, totally opaque nature of this account suspension is both disturbing and – in my case at least – a warning that I might want to reconsider how much I depend on it.

In any event, if somebody out there knows somebody at twitter who might be able to help me, I’d be deeply grateful. Having a suspended account isn’t the best PR, and I’d at least like to erase the stigma before people start thinking I’m a spammer or worse.

[UPDATE, SIX HOURS LATER:  So I go to bed suspended, and wake up restored. Yes, that’s right: twitter restored my account. However, in keeping with the opaque nature of this episode, they didn’t bother to send along an explanation. Rather, they just restored me. Were my emails the difference makers? Was I misidentified as a spammer? Did someone at twitter HQ grow tired of my China tweets? Perhaps, like my wife, they feel that it’s time I update my profile photo? Anything is possible, I suppose, in the absence of any kind of explanation. The End.]