During the run-up to the November 12 release of my first book, Junkyard Planet: Travels in the Billion Dollar Trash Trade, every weekday I’m posting a new photo taken during my decade of reporting on the global waste, recycling, refurbishment, and repair trade. This week, at the strong suggestion of my wife, I’m running a series we’re calling Hunks of Scrap (for more info, see Monday’s Scene). Regular readers may have noted that the series was terminated on Wednesday, due to a lack of quality material (despite an appeal to readers!). Today, thanks to a loyal reader, I terminate that termination, and finish up the week right. As always, click to enlarge: 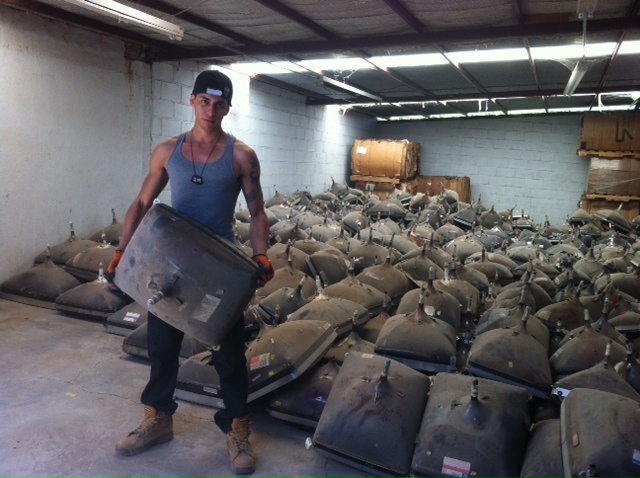 Meet Michael Cordoba, 22-years-old, originally from Colombia, and now an employee of Retroworks de Mexico, an innovative electronics repair and recycling business in Fronteras, Mexico (here’s a great 2 minute youtube video that explains what they do, and here’s a nice 2008 AP story that does the same). The photo was provided to me by Robin Ingenthron, American Retroworks’ founder, who explained that Cordoba spent two years training in Vermont, before moving to Fronteras to help “process CRT tubes into cullet for a local coppers smelter.” In layman’s language: the leaded glass is used in place of mined lead in the copper smelting process (that is, instead of digging a hole to get lead, they use an old tv). It’s essential work that provides good wages, environmental benefits – and one hell of a workout (as evidence by those arms). Many thanks to Robin and Michael for the photo and a fine ending to the Hunks of Scrap series. Next week, it’s back to the scrap – and just the scrap.