Today’s Scene from a Junkyard Planet – actually two scenes – takes its cue from a story circulating in the French press (thanks to Wee Ling Soh, who tweeted the story in my direction). There are a couple of versions floating around, but here’s a concise edit of the Local’s version of events:

Two Chinese tourists in Paris found themselves in hot water recently with anti-fraud authorities. After paying their €70 hotel bill in €1 coins, police found €3,700 in change in their possession, and arrested them on suspicion of forgery …

For their part, the two told a representative from the Paris Mint that they had acquired the coins from an unusual source back home.

“They said they had bought all the coins from scrapyard dealers in China,” the Paris Mint official told Le Parisien.

“When cars owned by Europeans, and destined for scrap metal, get sent to China to be recycled, the junkyard owners often collect dozens of euro coins from each vehicle,” the source added.

So here’s the deal. In Europe, the US, Japan, and other developed countries, automobile recycling is typically accomplished via giant metal shredders (for a delightfully entertaining take on metal shredders, see Foreign Affairs’ excerpt from my upcoming book on the subject – or just pre-order the book). Once the pieces are reduced to fist-sized chunks, magnets separate out of the steel from everything else – and everything else goes overseas to giant workshops where it’s hand-sorted into component metals before recycling (there are a couple of notable exceptions – one of which is found in my book). In any case, all of that shredded metal contains an often overlooked but nonetheless valuable commodity: all that change which fell out of your pockets and became lodged in the seats.

According to one US-based recycler who would know (his name is Jack, and he’s also in my book), the average US automobile contains $1.65 in change when it arrives at the shredder. And that means, generally, that there’s a LOT of change in the shredded metal that arrives in China every year by the millions of tons. Below, a metal sorting facility in Foshan, Guangdong Province. Metal has just been unloaded onto a conveyor and the women in the photo are employed to pick out the coins from it. And that’s all they’re employed to do. Note, in the below photo, the plastic buckets circled in red: those contain coins. 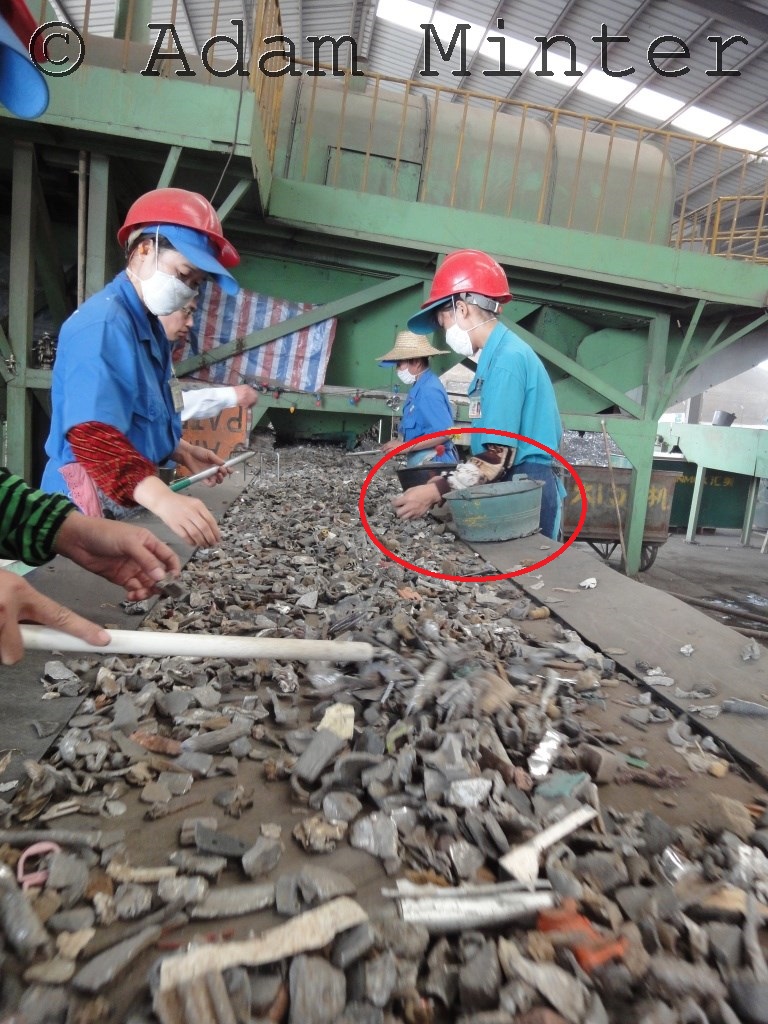 And, below, those are the coins. Gnarled and chopped up, but coins nonetheless. Needless to say, there are enough of them in that shredded metal to pay the salaries of these workers (at the time the photo was taken in 2009, the going rate was around $400/month). 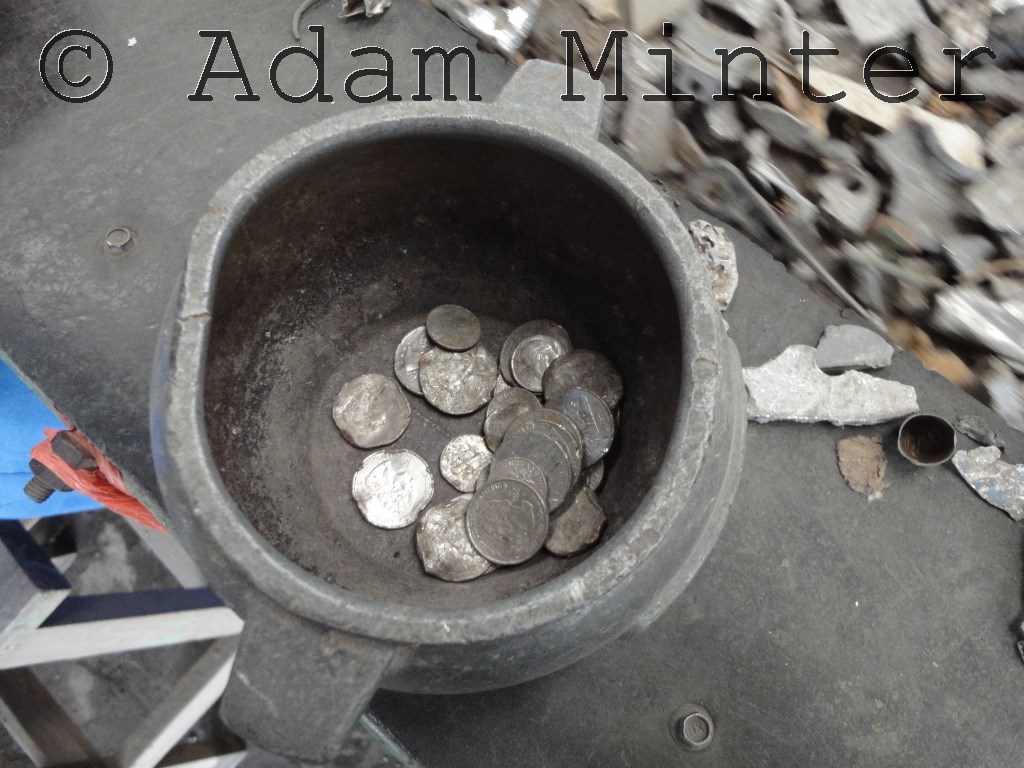 Clearly, some of those coins are re-usable and – predictably – the Chinese scrap processors who collect them are not averse to selling them to people who have their own uses for gnarled up money … like Chinese tourists who don’t mind schlepping them to Europe in suitcases. At Chinese scrap yards, the price of the coins is set at a serious discount to their actual value (and takes into account currency fluctuations – of course). The tourists probably figured they were getting a killer deal. Which, I suppose, they were.

As for the coins that can’t be re-sold for re-use because they’re too gnarled? They’re sent to smelters who recycle them into new metal. Viva la scrap.