For more than a decade, Gary Ries of Mission Hills, California, has spent his spare time earning money by picking recyclable cans and bottles from trash cans owned by the city of San Diego. Under most definitions, this is laudable entrepreneurship and everyone wins: Ries makes a few extra bucks, San Diego trucks a few less pounds of trash to the landfill, and, well, recycling! 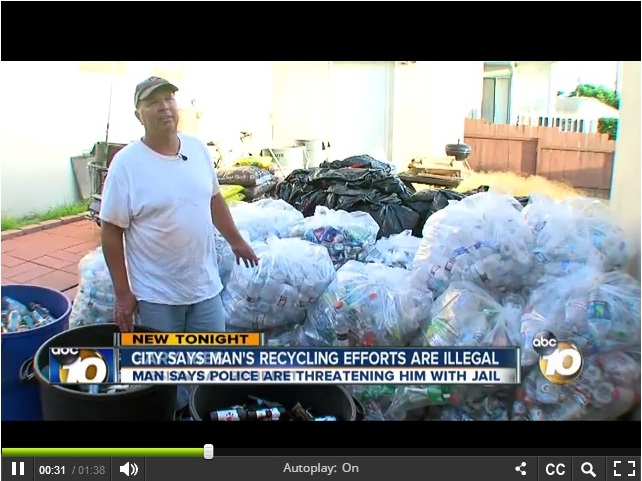 So, rather than laud Ries – or, better yet, just leave him the @#$% alone – the city of San Diego has decided to make him miserable. Last weekend, they twice issued $150 citations against him. And if he doesn’t stop recycling the city’s landfill-bound cans and bottles? The police officer who harassed him the first time around will “arrest him, take him to jail and have his bail set at $5,000.” 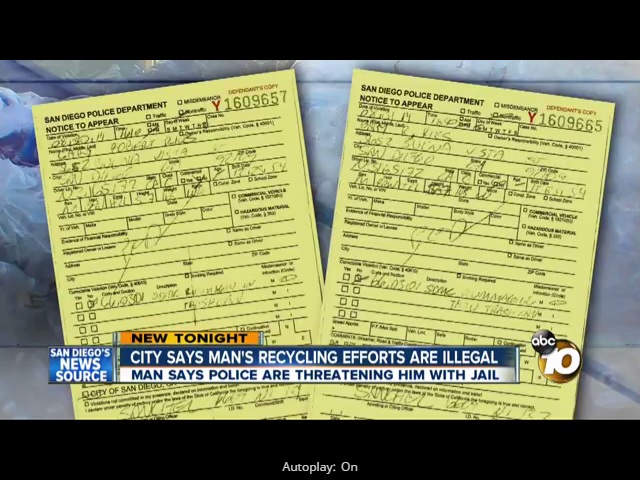 But it gets worse. San Diego isn’t merely concerned that Ries is stealing their garbage. They’re worried about liability if “someone gets hurt digging through the trash,” as well as identity theft (ie, the city is protecting people who might leave bank statements in San Diego’s beach-side garbage cans). Or, in the words of Jose Ysea, spokesman for the city of San Diego Environmental Services Department: “it’s more to protect the residents and the community at large.”

A couple of notes on this stupidity. First, if the issue here is what’s best for the community, then I think any rational human being would agree that the public interest is best served by allowing entrepreneurs to make a living by solving a problem that local government can’t (the cost of recovering recyclables once they’ve landed in the trash is cost prohibitive in the United States – that’s why they’re landfill bound). Of course, some recycling peddlers (I come from a long line of them) have a tendency to leave behind trash when digging through garbage bins – but Ries’ citations don’t accuse him of that. They just accuse him of recycling. So there shouldn’t be a problem there. As for whether Ries or any other peddler would hold the city liable for injuries sustained while reaching into a garbage can – I suppose it’s possible, but I think the likelihood is only marginally less that he’d be sucked into a garbage can and re-emerge in Shanghai.

Which brings me to China. Anyone who spends more than ten minutes in a Chinese city is acquainted with the millions of recycling peddlers who roam its streets, buying, trading, and taking anything that’s recyclable. If something is tossed out in Shanghai, and it’s recyclable, it’ll be recycled (I describe this phenomenon in chapter 2 of my book, Junkyard Planet). The proof is in the landfills. Unlike in the United States, where landfills are packed with recyclables, from cardboard to cans to televisions to clothes, Chinese landfills are remarkable for mostly being filled with organic food waste. The recyclables were pulled out long before the garbage trucks picked up the garbage.

As a result, Chinese cities have recycling rates that approach 99% – and US cities struggle to achieve rates over 60% (FYI – recycling rates are imperfect ways to measure resource conservation). Just to be clear: China achieves these amazingly high recycling rates almost entirely because of private sector entrepreneurs like Mr. Ries. It’s not nice work, in most cases, and most of the people do it because there aren’t other options out there for them (due to education, discrimination, and other social issues). But it’s dignified, socially valuable work, and it makes a profound difference to the quality of life in Chinese cities.

But here’s the thing: entrepreneurs like Gary Ries also make a profound difference to recycling in the US, too. Take, for example, San Francisco, home to perhaps the best government-run curbside recycling program in the United States. Yet, according to Jose Ortiz, deputy director of CalRecycle, California’s state recycling program, only 10% of the city’s recycling volume comes from curbside pickup. The other 90%? It’s collected at private recycling centers that buy recyclables from entrepreneurs like Gary Ries (San Francisco, in its infinite wisdom, is trying to push such centers out of the city – but that’s a topic for another blog). Statewide, only 8% of recycling comes through curbside bins.

So let’s not just leave Gary Ries alone. Let’s give him the respect that he and the thousands of small-scale entrepreneurs like him are due. Whatever harm he may be causing – and excuse me, but I’m having a hard time seeing it – is outweighed by the considerable good that the armies of private recyclers like him bring to cities around the world, every day.