Two years ago, on assignment in China’s Sichuan Province, I was stuck in a traffic jam caused by smog so thick that visibility was reduced to ten meters – at best (to my dismay, that would not be the last time). It was mid-afternoon, and I was seated next to an American scientist with more than a decade of experience in Chinese public health. As we waited, hardly moving, I watched him turn to stare out of the window, tap the glass, and suddenly ask: “Can you imagine what the respiratory illness data for this country would look like if we could get it?”

Alas, the need for imagination is over. According to BBC and AP reports (derived, apparently, from an FT story), the unpublished data has been collected by the World Bank and several Chinese government ministries as part of a series of yet unpublished papers called “Cost of Pollution in China.” Here goes:

If that’s not bad enough, it actually gets much, much worse. According to the various agencies reporting the story, the World Bank has agreed to China’s request to suppress this material from the pollution papers out of fear that it would cause “social unrest.” I’m not one to make these kinds of judgments, generally, but I think there’s little question that the World Bank’s actions are both cowardly and immoral. But more on that in a few days, after the World Bank releases its statement on the matter. For now, a January 2007 photo taken from a downtown Beijing hotel room: 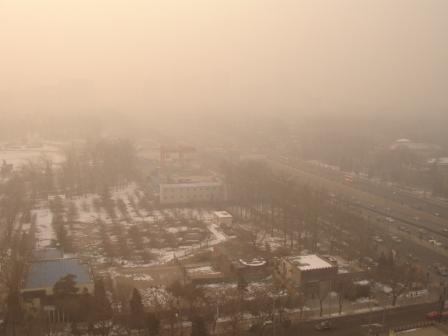