A shipping container arrives at a port and is immediately sequestered for inspection. The product that it purportedly contains is legal for import, but two decades of unfortunate experience have taught the customs and environmental authorities that the foreign shipment possibly contains materials hazardous to human health. In the case of the newly arrived container, the authorities open it, and quickly find that it does not match the shipping manifest. On that basis alone it will not be allowed to leave the port.

Alas, this is not a description of how the United States prevents tainted Chinese imports from harming the health and safety of its citizens. Instead, it is a precise description (personally witnessed) of the process used by the Chinese to prevent American hazardous waste from entering China and harming the health and safety of China’s citizens. Below, a photo of a rejected load of American scrap refrigeration compressors (hazardous due to the oils contained inside of the compressors) shipped illegally to Tianjin: 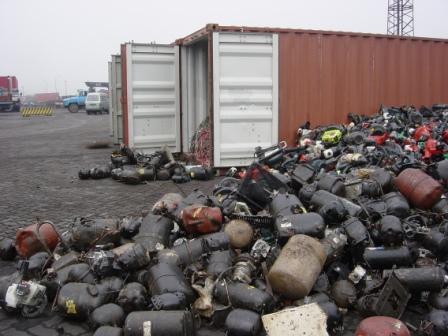 This situation has been on my mind ever since the first of the many recent reports on China’s export of contaminated and low-quality products, including pharmaceuticals and personal care items, began to appear in the international media (of these reports, the best have been produced by David Barboza of the New York Times). Foreign governments and consumers are rightfully concerned about trade in these products, and they have every right to expect the Chinese government, and their own governments, to take steps to ensure consumer health and safety or – in a worst case – cut off trade. However, at the same time, I think that consumers in developed countries – and particularly Americans – have a very well-developed blind spot in regard to the export of illegal hazardous materials.

For almost five years I have covered the Chinese scrap trade, and in the course of visiting Chinese ports and scrap facilities, I have seen American scrap shipments contaminated with medical waste, household garbage, dead animals, sludge, mud, and other items not included on the shipping manifest. And these are just the shipments that DON’T contain e-waste. All of this occurs despite China’s strict laws on waste imports – many of which were implemented in reaction to American exports of hazardous materials to China.

This is not a strictly American phenomenon. European and Japanese exporters of scrap materials to China equal, and often exceed the American scrap exporters in both volume and shady dealings. Below, a photo of a suspicious container of Japanese scrap wire being inspected in Tianjin: 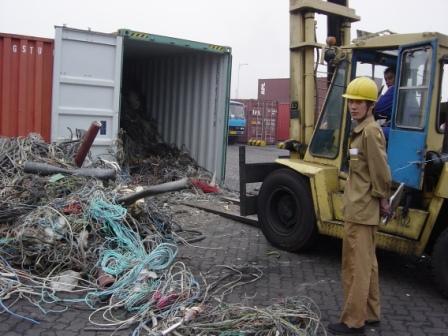 However, what makes the US shipments worth special attention is the simple fact that scrap – paper, plastic, and metal – is the top US export to China, by volume, by far.

In a March speech delivered in the northeastern port city of Dalian, a representative of China’s State Administration of Quality, Supervision, Inspection, and Quarantine [AQSIQ], China’s product quality inspection agency, reported that – of the 265,990 shipments of scrap materials that China imported in 2006 – 1.47% were disqualified. Of those, 689 were environmental disqualifications, with Russia and Kazakhstan accounting for 269 (primarily radioactive scrap steel), and the United States accounting for sixty (primarily e-scrap). However, the AQSIQ rep was careful to note that – despite the smaller number of shipments – the United States actually led in volume of environmentally disqualified materials. Under the Chinese accounting system, a single shipment might encompass thirty separate containers weighing twenty tons, each. Whatever the numbers, AQSIQ and other agencies involved in the inspection of waste shipments generally concede that the statistics on contaminated shipments are significant undercounts as a result of smuggling and thin staffing levels at the ports.

The laws violated by shipping scrap materials illegally into China are not only Chinese. The Basel Convention on the Control of Transboundary Movements of Hazardous Wastes and their Disposal, effective in 1992, regulates international shipments of hazardous materials, effectively prohibiting the shipment of hazardous wastes to developing countries. China and 170 countries are signatories; the United States is not.

[CORRECTION: My friend Bob Garino, Director of Commodities at the Institute of Scrap Recycling Industries, correctly points out that the US signed onto the Basel Treaty, but the United States Senate has not ratified it. Thus, the US is a signatory, but not a party to the treaty. That is, Basel is not binding toward the US or its citizens.]

How would the United States react if China’s leading exports to the United States were commonly laced with household waste, occasionally filled with hazardous waste and – to top it off – were usually shipped with fraudulent manifests? In the case of the tainted pet food shipped from China to the US, public and media indignation led to the dispatch of American inspectors to China and demands for better export controls from the Chinese.

In China, unlike in the United States, the government has publicly proclaimed an interest in promoting quality and legal exports; the United States government has never taken such a step in regard to the scrap trade. Ratification of the Basel Convention Treaty would be a fine first step. But in lieu of that, the Bush administration could take the honorable approach, and address the decades-long practice of illegally shipping American wastes to China.