UCAN is reporting that the Guizhou Catholic diocese will celebrate the first ordination of a Chinese bishop since the Pope’s letter to China’s Catholics was released on June 30. Father Paul Xiao Zejiang was elected the co-adjutor bishop (with right of succession when the current bishop dies or retires) in October, and the election was approved by the government-organized Chinese Catholic Bishop’s Conference on August 28. It is worth noting that the Pope’s June letter declares that “… the present College of Catholic Bishops in China cannot be recognized as an Episcopal Conference by the Holy See …”

Nonetheless, the UCAN story notes that “Bishop-elect Xiao has received papal approval for his ordination …”

If this is true, and there is no reason to believe that it is not, the ordination will mark the first public thaw in the frigid relations between China’s religious authorities and the Vatican since a series of illicit ordinations took place without papal approval in 2006. In their aftermath, the Pope convened a conference on the “Situation of the Catholic Church in China” in January 2007, the primary result of which was the June letter.

The Guizhou ordination is no breakthrough, however. Prior to the 2006 illicit ordinations, the Vatican and the China’s religious authorities had a quiet, tacit agreement whereby several episcopal candidates would be proposed for a position, and agreement would be sought between Rome and the relevant authorities in China on the one to be ordained. Joseph Xing Wenzhi, the Auxiliary Bishop of Shanghai, was chosen by this method, and ordained in June 2005. Afterwards, the Vatican’s role in his selection was reported in numerous media outlets, and Beijing’s religious authorities – thoroughly embarrassed by the revelation – denied it. Still, the method of Xing’s selection is fact, and it’s not much of a surprise that this method of selection is being utilized again [below, a photo (taken by me) of Xing at the June 2005 ordination]: 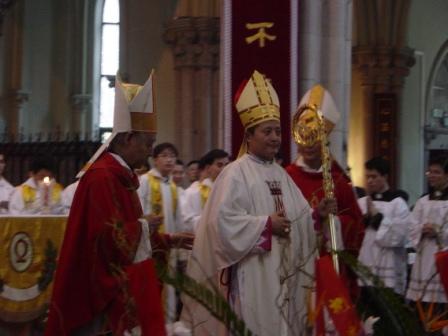 A couple of final points on the Guizhou ordination and the UCAN story.

First, Father Xiao, like at least five other current Chinese bishops (all ordained with the pontifical mandate), received his formation at Shanghai’s Sheshan Seminary [I am trying to obtain the number of current Chinese bishops formed at Sheshan, and will post the statistic later today – hopefully.]. As I note in the July/August issue of the Atlantic [subscriber only], the Vatican initially opposed the establishment of the government-registered seminary in 1984 when it was proposed by then Father (now Shanghai bishop) Aloysius Jin Luxian. In recent years Sheshan’s prominence has been somewhat supplanted by Beijing’s national seminary, but it is still a singularly important site in contemporary Chinese Catholicism and Christianity. It is interesting, too, to note that Father Xiao was ordained by Bishop Jin in 1994; according to the UCAN story, Xiao’s “Shiqing diocese had no bishop.”

Second, most observers of Chinese Church affairs expected the Vatican’s reaction to the upcoming (though unscheduled) ordination of Beijing’s Bishop-elect, Joseph Li Shan, to provide the first test of the Pope’s letter in China. For whatever reason – though certainly not a coincidence – the Chinese authorities have instead chosen a smaller, remote, and largely unimportant diocese to inaugurate this new stage in China-Vatican relations.

Though I have no specific knowledge on this matter, I suspect that the reaction to the Guizhou ordination will have a strong impact on how and when the Beijing ordination takes place.

[Finally, a hearty recommendation: Kenneth Tan at Shanghaiist has an excellent, link-packed post on the growth of Christianity and the enculturation of Islam in contemporary China.]