Recently I’ve received a few emails inquiring into why I haven’t had anything to write about China’s Catholics in recent weeks. My reply is that – in regard to subjects that I’ve covered in the past (the Pope’s letter to China’s Catholics, and the ongoing rapprochement between China’s two churches and between Rome and Beijing), there’s not much happening on the surface – and that’s where I’m in a position to report, mostly. However, the late September visit to China of Jean Baptiste Pham Minh Man, Cardinal of Ho Chi Minh City, Vietnam, has sparked a negative response that I think deserves some consideration.

Right away, though, I want to be clear about something: Cardinal Man’s visit – from September 24 to 28 – was not historic. Cardinal Man is only the latest cardinal among many to have visited China and its open Catholics over the last two decades (Cardinal Keith O’Brien of St. Andrews and Edinburgh is currently in China until October 30). In many cases – and this is not news, either – those cardinals have served as intermediaries from the Church outside of China.

It’s clear that Cardinal Man’s visit was – at least, partially – along those lines. And it was spurred – at least partially – by a March 2007 visit by seven Chinese government religious officials to Cardinal Minh in Ho Chi Minh City. No details have emerged about the closed-door meetings that resulted, but a copy of Cardinal Minh’s follow-up letter has leaked. In it, he offers detailed advice on how Beijing’s bishop could be chosen to satisfy both the government and the Vatican (modeled on Vietnam’s method, and advice not taken), and he requests the opportunity to visit China and its Catholic community.

Cardinal Man’s subsequent visit was, at a minimum, symbolic. At best, it may have been portentous: the Vatican has a working agreement with the Vietnamese government on the naming of bishops, whereby the Pope suggests a name, and the government offers its approval. If approval is granted, an ordination takes place. To an extent, this system has been utilized – informally – in China for several years, off an on. Some hope that it will be formalized. We’ll see.

Anyway. In the past, visits by cardinals and bishops to China’s open Church Catholic communities have produced some grumbling by members of the underground Church. But this visit, so soon after the Pope’s June 30 letter to China’s Catholics has produced grumbling that seems a bit more bitter than usual. For example, according to a UCAN report issued on Tuesday:

A priest from the “underground” Catholic community in eastern China told UCA News Cardinal Man was too high-profile a Church figure to meet CCPA officials so soon after the release of the papal letter and the Beijing ordination.

This priest (or the UCAN reporter) did not share a reason why this visit was too early, but instead offered this prickly response:

The priest, who requested anonymity, said he had read the prelate’s Oct. 4 interview with UCA News, in which the cardinal said he wanted to “share the faith we experienced in our country (Vietnam) with the Church in China, regardless of its underground or open churches.

The priest asked if Cardinal Man was able to contact underground Catholics in China, or whether he only “with open Church Catholics, or merely the CCPA.”

As I’ve written elsewhere, the divide between China’s open and underground Catholics is often as personal as it is doctrinal (and that’s not to minimize the latter, either). As I haven’t written elsewhere, being perceived to have taken sides with the open Church is – from the point of view of many underground partisans – tantamount to becoming a member of the CPA. The statement of the anonymous priest above is a textbook example of that kind of thinking (“you didn’t visit us, so you must only be interested in communists”).

For the better part of six months, most commentators on China’s Church have spent considerable time analyzing the prospects for diplomatic rapprochement between the Vatican and Beijing. That is certainly an important topic. But more important, at least from the perspective of the Vatican AND the Chinese Church (and in the context of the Pope’s letter), is the prospect for rapprochement between the open and underground churches. As other commentators have noted (most eloquently, Jeroom Heyndrickx) without rapprochement within the Chinese Church, there can be no rapprochement with Beijing.

The unnamed priest in the UCAN article is not alone in his disappointment with the open church and the Vatican’s efforts at reconciliation. Another recent UCAN article indicated that priests in Wenzhou (one of the underground’s long-time bases) are reluctant to reconcile – much less, concelebrate – with open church priests and bishops. And, most ominously, one of the underground’s leading supporters issued a statement directly criticizing the Vatican for not ordaining new underground bishops (for various reasons, I cannot and will not provide a citation link to the following passage):

For those who care about the Chinese Church, and the prospect for reconciliation (on multiple levels), these are not good signs or statements.

? The visit took place from 24-28 September, and included meetings with Shanghai’s bishop, Aloysius Jin Luxian, Beijing’s newly ordained bishop, Joseph Li Shan (his first visit by a cardinal), and an extended visit to the offices housing the Chinese Catholic Patriotic Association and the Chinese Bishop’s Conference (where Cardinal Man met with Ma Yinglin, the priest illicitly ordained as Bishop of Kunming in 2006) and other top Chinese religious officials. On a separate day, he met with the Foreign Ministry official assigned to European Affairs. Finally, he managed to visit the tomb of Matteo Ricci, the legendary 17th century Jesuit missionary who emphasized the need to incorporate Chinese language and culture into the Church’s life in China.

The last event caught my eye.

In June, while on assignment in Vietnam, I had the opportunity to visit Notre Dame Cathedral in Ho Chi Minh City (below). 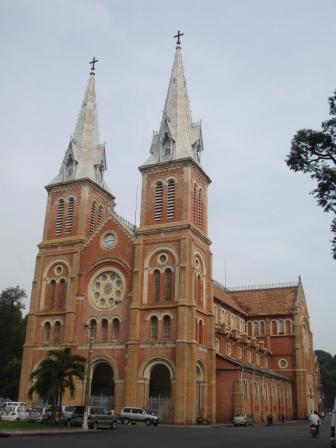 It’s a striking building – in a European cathedral sense. But what really caught my eye were the various memorial plaques that line several of the chapels. Generally, plaques before 1970 memorialize European names; those after 1970 – and there are many – memorialize Vietnamese names. And the division is stark. So, for example, here’s a chapel with pre-1970 plaques (I hope that these are legible — note the French and English): 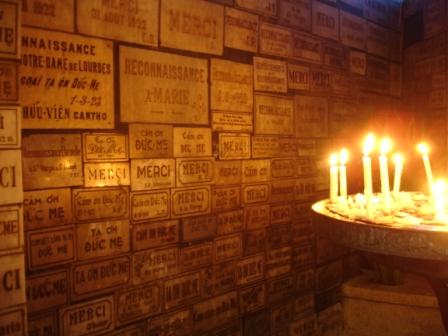 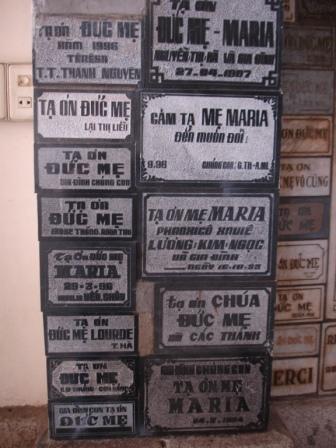 However, I don’t want to lend the impression that the two plaques and cultures (European and Vietnamese) are separated. They’re not. In fact, some of the most popular chapels within the cathedral contain altars incorporating elements of Vietnamese culture and European Catholicism. For example, below, a chapel that includes design elements borrowed from Vietnam’s temple designs. 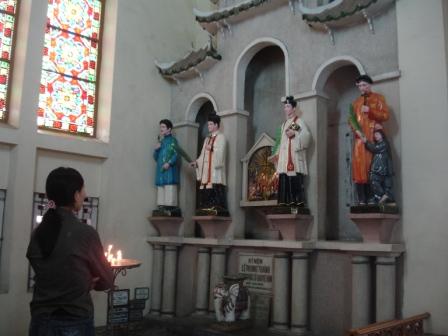 Enculturation – the term that Asian Catholics use for the incorporation of native cultures into local Catholicism – is not just an artistic movement. It’s about religion and politics, too, and the need to adapt the Church to the particular culture and politics of a country. Though I am no expert on the topic, it does seem as if Vietnam’s Church has been more successful in this regard that China’s, particularly in its ability to come to an acceptable accommodation with the government on the selection of bishops. Quite likely, the future of the Chinese Church will depend upon its ability to enculturate and accommodate similarly.