For more than a decade, China has been the world’s leading importer of scrap metal and paper. And for more than a decade, the world’s scrap exporters have been mostly content with this lucrative state of affairs. Mostly, but not entirely. In recent years – and particularly over the last 18 months – many exporters have begun looking for new markets in hopes of diversifying a customer base that could – without any problem at all – be entirely Chinese.

But that’s easier said than done. The factors that make China such an ideal scrap export market – thriving resource-hungry manufacturers, low-cost labor, and low-cost container shipping rates – aren’t replicated easily. Especially the last one. But that hasn’t stopped the exporters from looking. And, as they look, I’ve looked with them. Last year I followed the alternative market search to India. And in June I followed it to Vietnam, the current favored alternative. 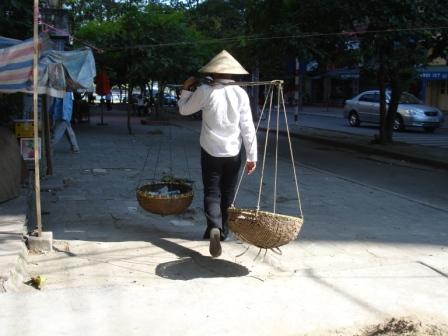 The new issue of Recycling International includes Part I of my long feature, “In Search of Vietnam’s Scrap Industry.” Scrap Magazine will publish the feature next month. An online version of the article will be available in a couple of months (on Scrap’s site). In the meantime, below, an excerpt.

The receptionist just glances at me as I walk past her and step into the slow, creaking elevator that takes me to the ninth floor of the Vietnam Steel Corporation (VSC) building in Hanoi. It’s a long, hot ride – the car isn’t air-conditioned, and the North Vietnamese heat feels like it is taking refuge inside of the elevator shaft. But when the doors open with a hard thunk, I breathe a little easier in the cool comfort of the Vietnam Steel Association (VSA). The lobby is empty, not even completed, but to the left is another receptionist, and she doesn’t appear surprised to see a foreign face.

‘Mister Tam?’ I say just as Ding Huy Tam, Secretary General of the VSA, greets me with a firm handshake and leads me into a large conference room lined by industry reports and windows that look out upon the overgrown village that is Hanoi. Mr Tam is 63 years old, but looks 20 years younger. He sits and listens as I explain that I am in the midst of the last of 14 days spent insearch of Vietnam’s imported scrap processing industry. I have been in the south, I tell him, and I have been in the north, but aside from two very large, rusty piles of ferrous scrap, I have found almost no significant imports.

Mr Tam smiles, pulls out a sheet of paper, and begins a patient and methodical listing of Vietnam’s major steel producers, including their current production volumes, under-construction volumes and planned volumes. ‘Phu My Steel,’ he says as he writes, ‘Five. Hundred. Thousand. Tonnes. Of billets. Four. Hundred. Thousand. Tonnes. Of. Bar. And Wire. Rod.’ This continues for several minutes, until he mentions privately-held Thep Viet (the other mills were mostly state-owned subsidiaries of VSC) and its new electric arc furnace (EAF) capable of producing 500 000 tonnes of billets a year, with room to expand to 1 million tonnes.

I stop him. I’d visited Thep Viet, and I’d been impressed. Mr Tam nods and goes back to his sheet of paper. ‘Vietnam. Has. EAF capacity. Of. Two million. Metric tons,’ he tells me. ‘Excluding induction furnaces and small mills.’ I had visited two of the small mills, and I was curious to know just how much of Vietnam’s secondary steel they produced.

[Below, the under-construction Thep Viet facility in Phu My.] 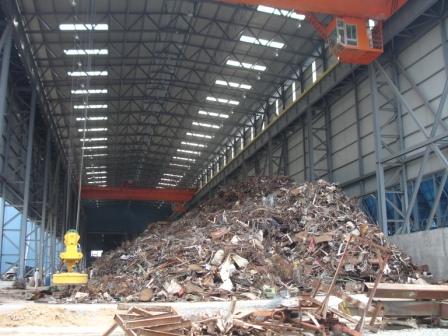