According to Xinhua: Beginning next month, international passengers will no longer need to fill out a quarantine form upon entering China. If you’ve been an international arrival at any of China’s airports over the last four years, you know the routine: it’s the little white photocopied sheet (in Shanghai, at least) requiring that you disclose whether you’re physically sick, psychotic (really), or whether you’ve been exposed to anybody – or thing – with those particular symptoms. And it is/was, a total waste of time: it’s hard to imagine anybody with a fever, or someone undergoing a psychotic episode, actually admitting it on a form required to enter China — after, say, a fifteen hour trip that cost close to US$1000 (Minneapolis to Shanghai: US$980 this week).

If memory serves me well, the quarantine form originated during the SARS crisis in 2003, and it was merely a small part of a much larger routine. Back then, incoming passengers were subjected to a far more detailed questionnaire (asking, for example, whether they had traveled to Toronto, Hanoi, or Singapore in the last ten days), which was then examined by someone in a white lab coat while someone else – also in a white lab coat – jammed a thermometer into the incoming passenger’s ear. Below, a photo of that routine as it took place at Shanghai Pudong Airport on the evening of April 28, 2003. 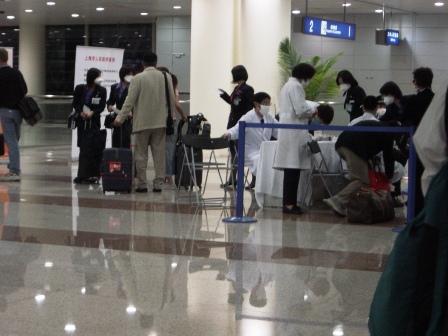 [And, for that matter, a brief account I wrote of what it was like to fly back to China in April 2003.]

In 2003, this was, all in all, a very good idea. And, had China decided to maintain the strict quarantine/inspection procedures that it instituted during SARS, that would have been justifiable: protecting China’s population from imported disease is in the national interest, under any definition. But, no surprise, as SARS ebbed, so did the strict quarantine procedures, and eventually – say, within a year of SARS – those procedures had been reduced to the quarantine forms. Since then, everybody – including China’s health authorities – has realized that that the quarantine forms are silly. It was just a matter of finding the right excuse to get rid of them.

That right excuse was, no surprise, the Olympics. Here, bluntly spoken, is Xinhua’s explanation:

Beijing Olympic Games organizers estimate that a cumulative 70 million foreigners will cross the border next year.

Fair enough: A procedure that had absolutely no public health benefit is now being revoked because – as a shell of its former self – it is nothing more than an inconvenience and a drag on productivity. If only it were possible to end other obsolete and wasteful government programs with such ease!

Nonetheless, having lived with the minor inconvenience of the quarantine forms for five years now, I can’t help but feel a little less safe. Ten days ago, a father and son in Nanjing were diagnosed with bird flu (the son died; the father has survived), and – so far – nobody can say how they caught it. However, it seems increasingly likely that the Nanjing case might be a rare and dangerous example of human-to-human transmission. Meanwhile, yesterday the World Health Organization conceded that a recent outbreak of bird flu in Pakistan was at least partly the result of human-to-human contact. And on Monday, Shanghai held a bird flu “drill” designed to prepare emergency workers for quarantine and containment activities in case of an outbreak. So, perhaps we’ll be back to the SARS-style screening procedures in short order, anyway.

[Quick Addendum: I’ve been a bit surprised at the lack of interest in the recent bird flu news from the english-language blogs based in China. I’m not calling anybody out here – heck, this is my first post on the topic, too – but it seems like a subject that would interest more people. In either case, on Tuesday Patrick Thibodeau at Computerworld posted a very useful list of bird flu links, including blogs. Well worth checking out if you’re interested in the subject.]