On Sunday I found myself in Suzhou with a few hours to kill, and so I decided to spend a little time at the I.M. Pei-designed Suzhou Museum. Opened in October 2006, the building has received mostly warm reviews partly predicated (I believe) on the belief that the structure might be Pei’s last commission. At the same time, the Museum complex was designed to complement – and update – the traditional white stucco walls and gray tile roofs that define Suzhou’s unique architectural heritage. As Pei told the International Herald Tribune:

Instead of gray tile roofs, I needed something that would develop volumes … [S]o I let the walls climb onto the roof. If the walls were stucco, why not the roof? 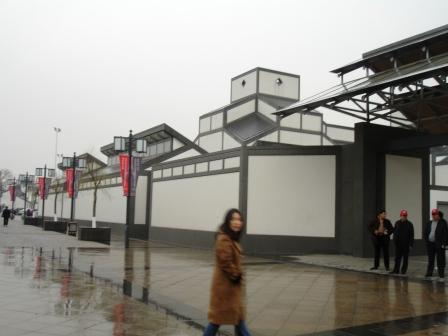 On Sunday, I paused beside those stucco-like walls, ran my hand along their surface, and – sensing something weird – I knocked upon them with my knuckles, as if I was knocking on a door. The response was a hollow, sharp, thump – the very sound that I’d expect if I was knocking on a large sheet of wood hung over an empty space. To say the least, this was an unexpected result. And, just to make sure that it wasn’t an anomalous one, I walked around the museum, knocked on exterior and interior walls (I know: I must have looked nuts), and found the same result throughout the structure. That is to say: the exterior and interior walls of I.M. Pei’s Suzhou Museum aren’t made of stucco, brick, concrete, or any of the other classic materials and methods used for centuries in Suzhou. Instead, they’re mostly likely made of some kind of painted fiberboard (there isn’t a tree outside of California’s national parks capable of providing solid sheets big enough for those walls) that is anchored to a solid core by some kind of bracketing.

This is odd. After all, as anyone who has lived in China can attest, poured concrete is the building material of choice in China. It’s cheap (as a a method and material) and it’s been utilized for centuries. In Suzhou, where masonry is a design principle and a way of life, it’s hard to find a building that isn’t built from poured concrete walls and/or simple masonry – especially those that are of traditional design, or derived from it. So why on Earth wasn’t the Suzhou Museum built that way, too?

This morning I allowed myself a twenty-minute google search to determine whether anyone else has commented upon the museum’s construction materials, or whether, perhaps, Pei or his firm preferred fiberboard to masonry and stucco. In both cases, I have been unsuccessful – even though the Museum has been open for more than a year. Still, I have a hard time believing that I am the first person to notice, much less, comment on this. So, it may be the case that I am simply incapable of appreciating the advantages of fiberboard over masonry (much less, finding other commentaries on the same subject). Or, perhaps, others are just too polite and/or afraid to take note of the fact that the walls of Pei’s likely last commission will begin rotting in a few years (I noticed the black streaks of leak in several places throughout the complex). Or, most likely, nobody wants to ask what masonry would have cost, compared to fiberboard, and why the money wasn’t appropriated, or where it went, if it was. But really – could masonry be that much more expensive than fiberboard? Could Suzhou be so cheap? Could I.M. Pei and/or his firm be so careless? I’d love to have answers to any or all of these questions. 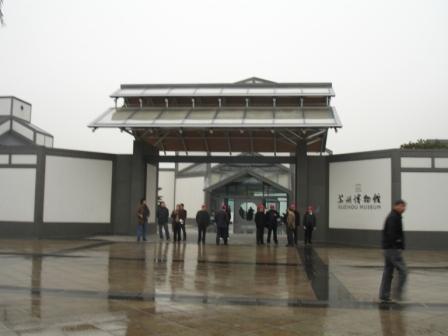 Anyway, if I’m totally off-base here, I hope somebody will either comment, or send an email explaining why. I’ll be happy to post any reasonable information providing an explanation for the choice of materials used in this important building complex.

[UPDATE: A couple of quick hits. First, Ding comments that the museum cost RMB 339 million. If that statistic is accurate, then I am even more curious as to why the Suzhou Museum didn’t use masonry instead of fiberboard or whatever it is that’s covering the empty spaces in the interior and exterior walls. That’s an astonishing amount of money for a rather modest complex – in China.

Second, via China Law Blog, an interesting recent post by Wangjianshuo in which he asks, of China, “Are we afraid of grace and beauty?” and “Where are the beautiful places we built recently?” He offers two answers to the latter question, one of which is: the Suzhou Museum.

I agree with Wang: the Suzhou Museum is beautiful. But, alas, it is also tragic because – like so many recent buildings in China – it was built cheap, and won’t last.]