Via Shanghaiist we learn that the Shanghai Astronomical Observatory is relocating to Anji, in Zhejiang Province due to light pollution. The only surprise in this news is that it didn’t happen sooner: even on clear nights, a person can count on two hands the number of stars bright enough to shine in Shanghai’s heavily illuminated skies.

But if it’s not worth mourning on a scientific basis, it is worth mourning on a historical basis: That telescope and observatory is one of Shanghai’s last links to the great Jesuit scientists responsible for many of the city’s most important institutions, including many of its universities (including, indirectly, Fudan), hospitals, museums (including the much-maligned Natural History Museum), and public laboratories. In contemporary Shanghai, these origins are mostly unknown and increasingly irrelevant; but sixty years ago they were not only relevant, but pertinent: the Jesuits were the key piece in the city’s scientific establishment.

Famously, Jesuit priests had served as astronomers and meteorologists at the Ming and Qing courts, and – at the end of the Ming – they even built an observatory in Nanjing. In 1841, soon after missionaries were allowed to return to China, a Jesuit Father named Gotteland was directed to build an observatory south of the Yangtze. For reasons that I can’t dig up, the building was not completed until 1873. In either case, that building stood on the banks of Zhaojiabang Creek (yes, the filled-in site of today’s Zhaojiabang Road) in Xujiahui, and was replaced with a better, bigger building in 1901. From the beginning, the Observatory had four departments: astronomy, meteorology, seismology, and magnetic science. The Astronomy department moved out to Sheshan (21 miles from Xujiahui) in 1890, and occupied the (now closed) Observatory on Sheshan Hill. Below, a photo of the first scientific telescope in China, commissioned, installed, and used at the Shanghai Observatory (I’m afraid that I don’t have precise dates for it, though). 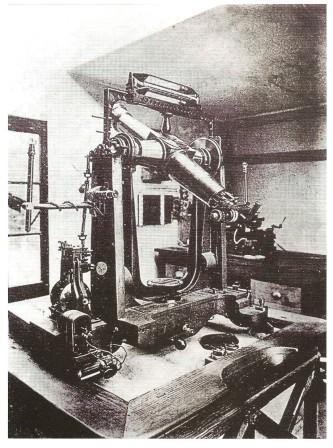 Those Jesuits were serious, publishing internationally regarded journals (The Sheshan Astronomical Journal, most notably), making key longitudinal observations (Shanghai was one of the world’s three original “longitudinal bases”), and serving as a key station in what was then the world’s largest private meteorological network (there were some seventy Jesuit weather stations in Asia – with Shanghai being the hub).

In 1949, everything changed (understatement). The Meteorological Observatory was divided from the Astronomical Observatory (for reasons that I haven’t been able to figure out), and by 1951 most of the foreign Jesuits had been expelled from China. Chinese (Jesuits, and not) took over the Observatory, but – due to changing politics, funding, and the evolving nature of astronomy – it never regained its international stature.

Nevertheless, the Jesuit meteorological station continues to make observations and broadcast forecasts to the people of Shanghai. The Jesuits no longer run it – that privilege now belongs to the Shanghai Meteorological Bureau – but visitors to the Bureau’s website will find a photo of the old Jesuit Observatory headquarters, and a brief history of the Observatory (that pastes – delicately – over the Jesuits).

I don’t have the time to go into the Jesuit scientific enterprise as it was undertaken in Shanghai and China, as a whole, but if you have an interest in the subject, I highly recommend “Jesuit Journeys in Chinese Studies,” by Yves Camus, which can be found in .pdf form HERE. The history of the observatory at Sheshan dates back to 1890, and a brief history – including the Catholic part – can be found in this Shanghai Star article from 2001.

Finally, if there is any question as to the importance of scientific observation to the Shanghai Jesuit enterprise, let the map – below – resolve it. Drawn during the 1930s, it shows the Xujiahui neighborhood (using its Shanghainese name, Zikawei). Note the location and size of St. Ignatius Cathedral (circled in red) in relation to the size and location of the Observatory. Believe me, this was serious business. 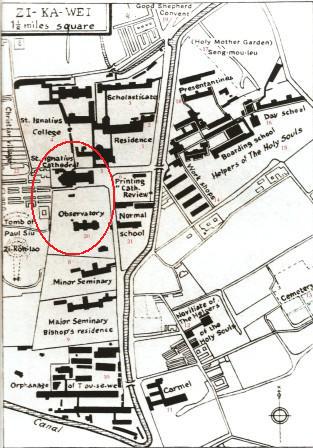 Finally, I apologize that I don’t have any images of the Sheshan Observatory with me at the moment. They are on a hard-drive in, well, another country. If a reader has any that can be shared, I’d be very happy to post them.

[UPDATE 4/2/08:] I was out at Sheshan this morning, and snapped this image of the observatory as it sits just beneath the cathedral: 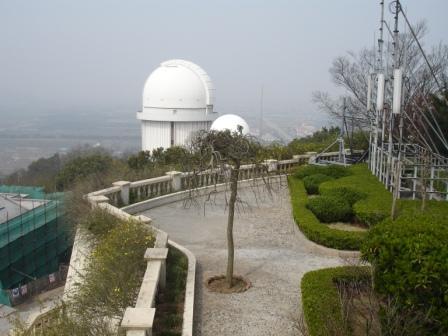