On Sunday afternoon I was in Hongkou, retracing some old reporting for a new story, and I decided to take a two block detour over to the old Ohel Moishe Synagogue. In 2006, I became quite familiar with the building, and its neighborhood, while researching two stories related to World War II-era Jews who were granted refugee status in Shanghai (my favorite  of these stories can be found here). It’s been more than a year since my last visit, and I’ve since heard that the synagogue has undergone some restoration work. Which, in fact, it has (see photo after the jump), and to its great benefit.

Anyway, the renovations are fairly old news (they were largely complete by Fall 2007). What is news – and what is also worth seeing – is the new refugee museum behind the synagogue. According to the charming old docent (below, in protective museum booties), the Museum isn’t scheduled to open for “another month or so.” But, it’s so great that “somebody” decided to open the doors on Sunday for a sort of makeshift sneak preview requiring the aforementioned booties. 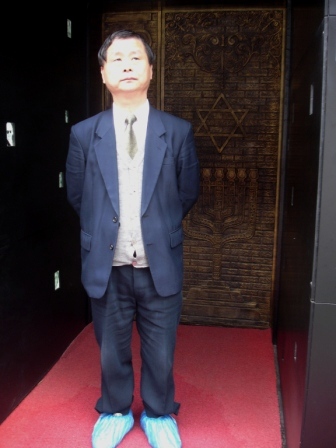 Unfortunately, but understandably, the docent asked that I not take any photos inside of the museum. So you’ll just have to bear with me as I testify: this is one great museum. It’s a modest space, to be sure, but entirely modern and – best of all – it features great multimedia, including several extended videotaped interviews of Jewish refugees who lived in Hongkou during the 1940s. In 2005 I had the privilege and fun of spending several days walking Hongkou with a returned German-Jewish refugee, listening to his recollections, and his rusty Shanghai dialect; the museum’s priceless taped interviews are the next best thing to having that kind of experience.

The Shanghai Jewish Refugees Museum is located 62 Chanyang Road (at Zhoushan Road). The synagogue section of the museum is currently open, but there’s no guarantee that the nice old man who was sneaking people into the incomplete museum on Sunday, will be doing it again (before the grand opening next month). You might want to call ahead if that’s your goal. The number is 21-6541-5008. 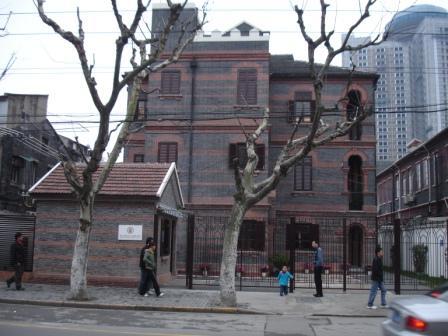 Finally, I think it’s worth mentioning that the renovations – and the museum – were paid for entirely by Hongkou District. Shanghai takes quite a bit of guff – some deserved, some not – for its historical preservation efforts/non-efforts. And some of that guff has – on occasion – come from me. So, credit where credit is due: the museum is a marvelous gift to the people of Hongkou and the many thousands of foreign tourists who seek out Shanghai’s Jewish refugee story every year.