[Alternative Title: “You Picked a Fine Time to Feed Me, Beijing“]

On the verge of the Olympics, Beijing opens one of the largest, and most architecturally uplifting, airport terminals in the world. In an effort to improve guest services, the airport authority invites outside vendors – Starbucks, KFC, TCBY(!) – to set up shop in the concourses. So – which foreign restaurant chain has the most prominent perch in the new terminal, the pride of place, the American chain sign most visitors will see first? 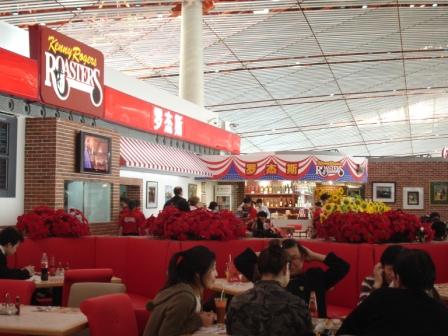 [What? You were expecting McDonald’s?]

I’ll admit. This troubles me. It troubles me because – among other reasons – it takes only a few minutes to figure out that Kenny Rogers no longer has an ownership interest in Kenny Rogers Roasters (the company was acquired by Nathan’s in 1998). It troubles me because – even though he has no ownership interest – the Beijing airport outlet shows an endless loop of Kenny Rogers concert footage to its customers. And this is all the more strange because I’ve never, ever sensed that Kenny Rogers has a Chinese fan base (I’m open to being corrected on this point).Celine Dion’s Roasters, Karen Carpenter’s Roasters … hell, Avril Lavigne’s Roasters – those would all make more sense from a name-recognition standpoint in the Chinese marketplace. But Kenny’s? I don’t think so. 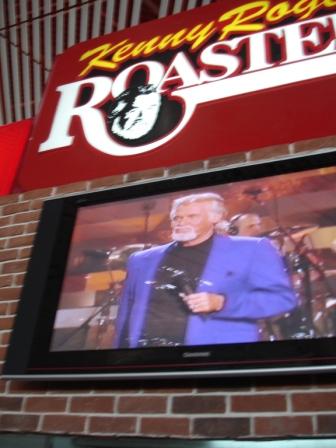 In another life, I might try to track somebody down from company HQ to hear what – exactly – they’re thinking (I might also ask one of the Beijing customers what they think of enjoying a wood-fired rotisserie chicken beneath an image of Kenny singing “Ruby, Don’t Take Your Love to Town“) But instead I just called a friend who knows a little something about this company and industry. He couldn’t speak to the China strategy, but he did tell me something that I didn’t want to believe: “Kenny Rogers is big in Malaysia.”

As it turns out, Kenny Rogers IS big in Malaysia – thirty-five stores big, compared to just ONE in the US (Ontario, CA). Now, as to what this tells us about China, country music, and rotisserie chicken, I can’t really say. But in the spirit of winding up this relatively pointless post with something useful, I’ll merely point out that Kenny Rogers is not the only dying or dead US brand that has moved to Asia and found a second life (taste: Orange Julius in the Philippines; watch: 10,000 BC in Chinese movie theaters). Whether that’s a good thing or not, I’ll leave to others.

[For the record, I have twice – in five years – enjoyed a meal at a Shanghai Kenny Rogers roasters.]