For all of the talk about racial tensions between Han Chinese and Tibetans, there has been surprisingly little talk about the obvious (to me) racial subtext to the anti-Chinese/pro-Tibetan protests in London, Paris, and San Francisco. But how can one miss the fact that the most vocal torch protesters (in much greater numbers than Tibetans) are white, while the most vocal torch supporters are Asian? Put differently, why are there so few Caucasians turning out to vocally support the torch run? Can the difference really be chalked up to politics and/or ignorance? After all, Chinese living in London, Paris, and San Francisco have access to the same news sources as Caucasians.

If one listens carefully to the commentary on these upcoming Olympics, there are two narratives. The Chinese narrative claims that the games are about sport and harmony; the Western narrative insists that they are about politics and human rights. To be sure, both narratives are legitimate, but I think it’s fairly obvious, especially after the last two weeks, that race (and the emergence of a non-white superpower) is becoming the central narrative of Beijing 2008.

In 2004, shortly after winning a gold medal at the Athens Oympics, Liu Xiang explained that his medal “proved that athletes with yellow skin can run as fast as those with black and white skins.” This jaw-dropper revealed much, not least of which is the fact that – by and large – the Chinese, at least, have been much more open than the West about the uncomfortable racial subtext surrounding international sport and Beijing 2008. Indeed, not a Shanghai day goes by when I don’t hear someone say, or read a blog that claims, that the West is attacking the torch because it wants to keep the Chinese people “down.” Sadly, I think there’s occasionally some truth to that (often) knee-jerk reaction, and it’s something that the West (and its protesters) would do well to reflect upon.

Consider, for example, the Chinese Army conductor depicted in this 2006 cartoon postcard distributed by the Free Tibet Campaign (the full card downloads as a .pdf). 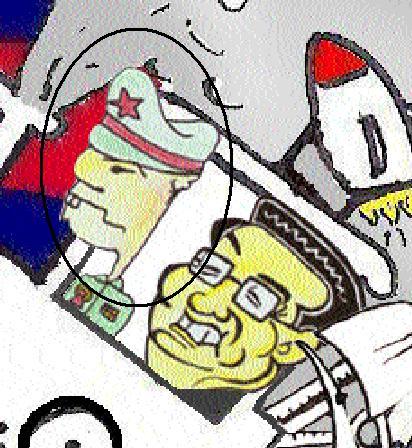 Now, I don’t really have the stomach to go into the history of the buck-toothed Asian as a tool of ugly racial stereotyping in the West. There’s a fairly intelligent discussion thread on the topic, here. Whatever its origins, I am certain that the buck-toothed imagery wouldn’t have been included in this postcard if someone of Asian ethnicity had been involved in designing the campaign. Likewise, I suspect that the ugliness displayed in Paris, London (and – sort of – in San Francisco) would have been toned down significantly if there had been large numbers of Asian joining the Caucasian protesters. Indeed, there probably wouldn’t have been any protests at all.

Now, just to be clear: I am not downplaying or denigrating the legitimate concerns of the protesters. Instead, I am asking whether or not the ethnic background of those protesters plays a role in the way that their concerns are expressed (if and when the torch is run through Delhi later this month, we’ll have a chance to measure the vehemence of a majority non-white protest).

In either case, the concerns of Western protesters should give China similar pause to reflect on its racial politics. Leaving aside (only for now) questions of sovereignty, there’s no argument that Tibet is riven by concerns about racial and cultural discrimination. And, to a very real extent, China’s future on the Tibetan plateau will depend upon how well it deals with the racial subtext it has injected into this restive region. An excellent place to start considering this topic would be two letters published on Lian Yue’s blog, generously translated into English on the terrific Black and White Cat blog.

Finally, in hope of rounding out this uncomfortable (for me) post with a dose of optimism, I highly recommend Tommy Tomlinson’s fine story on former UN Ambassador and Atlanta Mayor Andrew Young for ESPN.com. Young, as many Americans remember, was also a senior aid to Martin Luther King, and was present at King’s assassination. In Tomlinson’s article, he comes out as a strong supporter of the torch relay:

In 1965, civil rights marchers were beaten by police as they crossed the Edmund Pettus Bridge in Selma, Ala. In 1996, Young crossed that same bridge, Olympic torch in hand, as part of the torch run to Atlanta. Selma schoolchildren, black and white, walked by his side.