It is likely that last night’s performance of Motzart’s Requiem marks the first time that a philharmonic orchestra has ever played inside of Shanghai’s century-old St. Ignatius Cathedral. The calculus is rather simple: prior to 1949, there was no philharmonic to play in the cathedral; after 1949, and especially after 1951, it was difficult enough to have priests in the church. According to a middle-aged priest to whom I spoke before the concert, it is unquestionably the first such performance since the church was returned to the Shanghai diocese, in 1978, after having spent the Cultural Revolution as a state-owned grain warehouse. “But even five years ago,” he told me. “Such a performance would have been unthinkable.” 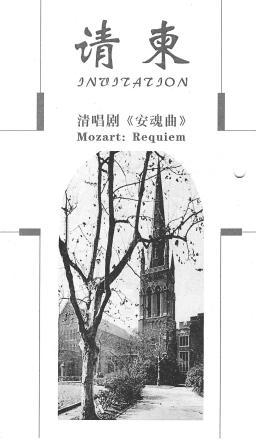 And what a pity that is. Because, among other revelations, an audience of well over 1500 people learned tonight that St. Ignatius has extraordinary acoustics. From the first note, the grand old building amplified the sound without rendering it shrill; vocal solos were full, and the words were completely decipherable. That is no small trick in an eighty-foot high masonry room.

Yu Long conducted the China Philharmonic Orchestra and the Shanghai Opera House Choir, and they were spectacular. It must be said, too, that they were also inspired: prior to the performance, several members of the orchestra thanked concert organizers for the opportunity to perform a Requiem in its proper setting. I have no idea if last night’s performers had ever performed in a church before, but what is certain is that they had never before performed in such a large church, much less a French gothic one – for it so happens that St. Ignatius is the largest church building in China.

The Requiem was, in turns, thunderous and elegant. But the true highpoint of the evening was the encore performance of Mo Li Hua (èŒ‰èŽ‰èŠ±), or “Jasmine Flowers.” I don’t know the arranger of this particular version of the well-known tune, but the fullness of its expression – as sung by the choir over the orchestra – was revelatory and deeply moving.

Last night’s concert was initially organized in support of the ongoing project to restore the stained glass windows of St. Ignatius (destroyed during the Cultural Revolution) with windows that incorporate distinctly Chinese elements into the traditional Catholic iconography. Father Thomas Lucas, the San Francisco Jesuit who serves as technical and liturgical adviser to the project, has long described it as an effort to place “Chinese flesh on European bones.” And, indeed, those involved in the project take measurable pride in the notion that the windows – in the fullness of their Chinese expression – will one day be a unique Chinese contribution to Catholic liturgical art.

In its own way, the image of a Chinese philharmonic playing a traditional Chinese melody in this most Western of buildings – itself, once a symbol of colonialism – also suggested Chinese flesh upon European bones. In recent weeks, and for obvious reasons, many writers and commentators (and bloggers) have taken a very dim view of Chinese national pride – especially its more nationalistic expressions – and yet who could begrudge last night’s largely Chinese audience (which included Shanghai’s Mayor Han Zheng and the film director Feng Xiaogang) a bit of pride at what Mo Li Hua, in that setting, by that ensemble, symbolizes?

Like many foreigners in China, I have struggled over the last several weeks to square my affection for this complex country and culture with the painful news that continues to be made in Tibet and West China. I make no excuses for what has happened out West. At the same time, though, I cannot deny that last night’s concert represents, in some small way, the strides made in China over the last thirty (nay, one hundred?) years, as well the issues that are still to be resolved and forgiven. I feel no shame in admitting that I continue to struggle with those contradictions.