We’ve come a long, long way since the bogus Olympic Bible Ban stories of last fall. First, the Chinese Protestants publish a special, bi-lingual edition (50,000, complete with the Olympic seal on the cover) for distribution during the Games. And now the Catholics – with the aid of United Bible Societies, and some Franciscan translators in Hong Kong – have published their own bi-lingual hard-bound edition for the Olympics. The cover is blank except for “New Testament” in English and Chinese. The first page, however, is rather interesting: 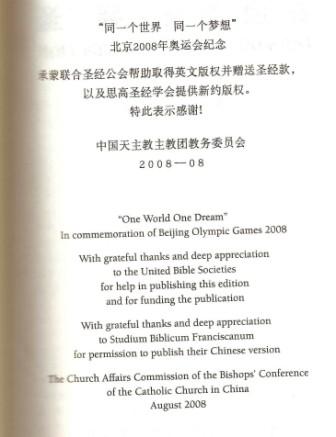 The odds of these three organizations ever again sharing an acknowledgement page is – oh, I dunno – slim to never. And I guess that gets to the point that these Olympics are capable of bridging deep gaps. Per that – the person who gave me a copy of the Catholic edition was keenly aware that a number of US-based media organizations have been running critical stories about China’s religious situation. “You should tell your reporter friends to stop comparing China’s religious freedom to the USA,” said this person – someone with first-hand experience of what happens to those who publicly defy China’s religious authorities. “And start comparing it to China thirty years ago.”

As much as any reporter, I’m leery of reporting self-congratulations. And yet, in this Olympic year, when Catholic bishops and Protestant pastors, alike, are given the honor of carrying an Olympic torch in front of supporting crowds, I can’t help but marvel at the distance covered in the three decades since the Cultural Revolution. The situation is far from perfect, but it’s better. Much better.