I arrived in Shanghai on September 5, 2002, with plans to be here – I dunno – six to eight weeks, and then head back to the US. Obviously, it didn’t quite work out that way.

Many things have kept me here. Too many to list, really. But the best accounting comes from an extroverted Dongbei friend who spent a year in the USA last year, and who chalked up his love of the experience to what he called the “three f’s”: “Friends, food, fascination, in that order.”

[I should note that – unlike most Chinese in the US – this friend happened to live next door to a fabulous Mexican taqueria in Southern California, and it provided many if not most of his meals. No tuna hot dish for him!]

Three F’s. Sounds about right to me. Over the course of six years as an expatriate, you tend to find yourself having some of the same conversations, over and over, with other expatriates. The relative demerits of Shanghai food. The relative merits of dating Hunanese girls. And the one that I started having with other journalists almost the moment I stepped off the plane in 2002: “Will you be here for the Olympics?”

Six years ago, five years ago, even 18 months ago, I didn’t think so. It was too far away, and it sounded like too much trouble, anyway. But now, on August 7, 2008, not only am I here, I’ve got tickets (begining tonight in Shanghai) and assignments, and – boy! – I’m sure glad that I stayed. To my Chinese friends, especially the ones who have been my teachers and guides over the last half-decade, I wish you a wonderful three weeks. It’s been a privilege to watch the transformation of your country in the run-up to tonight, at Shanghai Stadium.

Finally, an even more personal note: anybody in Beijing have extras for baseball? Seriously, email me through the contact form, if so.

Below, a photo of the magnificent Denard Span of the Minnesota Twins, stealing an HR from Adrian Beltre in Seattle last night. Before he was called up from AAA Rochester in June, Span was slated to play in the outfield for the US Olympic baseball team. Minnesota’s gain, America’s loss! 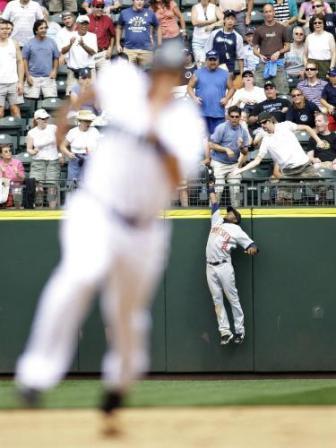 Photo by Ted S. Warren for the AP

[UPDATE It’s worth noting, that Span’s choice is one not available – or socially acceptable – to Chinese athletes. Here, national glory, not individual professional glory, is the primary athletic concern. But Yao Ming, as in so many things, seems poised to shift the priority, as this very good post at Shanghaiist explains. He’s had enough of this Olympics business – something that I contemplated last year in this post.]