For foreign visitors not intimately familiar with the modern history of Chinese soccer fandom, the unabashed enthusiasm (not to mention face paint, hats, jerseys, and flags) that the local fans have shown for Argentina’s national team during the last week of Olympic group play at Shanghai Stadium has been nothing short of surreal. Argentina, by a wide distance, has enjoyed home-field advantage here.

But, you may be asking yourself, why such Chinese enthusiasm for Argentina? Actually, the answer is pretty straightfoward. Just go ask any Chinese soccer fan over the age of thirty, and you’ll get some variation on this: the 1986 World Cup was the first to be widely televised in China, Argentina – behind the amazing, transcendant play of Diego Maradona – won it, and there’s been a deep Chinese reservoir of support for the team – and Maradona – ever since (I touched on this phenomenon in an Atlantic dispatch last week).

Anyway, last night Argentina defeated the Netherlands in a thrilling, extra time quarter-final match at Shanghai Stadium. But as fine as the match was, the true high-point of the evening was the unexpected appearance of one Diego Maradona in a stadium VIP box. His face was flashed on the screen, and the reaction was a slow build, from a buzz (as people elbowed each other to look up at the screen) to a full-throttled roar of joy. I was seated above the VIP box (still awaiting that invite…), so visitors to this blog will have to do with a photo of the Jumbotron’s image of FIFA’s co-Player of the Century acknowledging the crowd’s support of his national team. A great moment, twenty-two years in the making, and needless to say: Jia you! 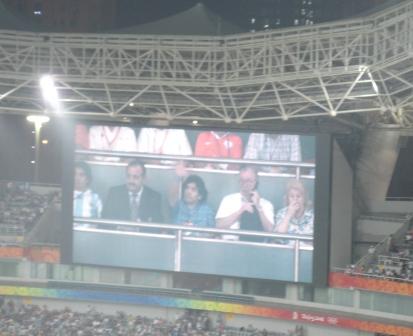