Recently, lots of blogging and reporting about the empty seats at events up in Beijing. Well, down here in Shanghai we like to do things bigger – or, more empty, if you will. Case in point: A photo taken three minutes into this evening’s women’s soccer semi-final between Brazil and Germany. 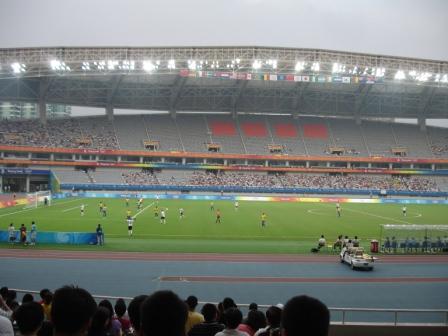 Just to be clear: this was an Olympic semi-final, with the winner being guaranteed at least a silver medal, between the two finalists from the 2007 Women’s World Cup (held in China), both of whom hold a clear and evident disdain for the other. Oh, and the best female soccer player in the world, Marta, was guaranteed to be on the field. Yeah, who’d want to show up for that?

But it gets worse. I’d guess that 40% – 50% of the spectators were actually Shanghai schoolkids bused to the match and given free tickets. So, take another look at the photo, and then subtract.

No way to excuse this as an instance where sponsors, officials, and media didn’t bother to show up for their seats. This was, all in all, a failure to sell tickets. And it gets back to a point that I’ve made here ond here: that, if you take away Argentina‘s celebrity soccer gods, folks in Shanghai really can’t be bothered with this Olympics business. Even though, sheesh – it was a semi, for goodness sake.