I think that I’ve blogged quite enough about Shanghai’s Olympic soccer matches, so – barring something really interesting happening at tomorrow’s men’s semi – this will be the last. And we’re going out with a bang. Here’s the background:

Last year, Germany blanked the far more entertaining Brazilians, 2-0, in the Women’s World Cup final. I watched that match, and if memory serves me correctly, the bigger Germans won it through brute physical force, supplemented by pushes, shoves, and trips. All in all, that’s pretty much the strategy they came out of the tunnel with tonight. But, bless the Brazilian women, they weren’t going to be bullied this time, and at the 53rd minute, they closed the book with a 3-1 lead. That could have been it. But then, at minute 76, forward Cristiane, perhaps angered by the continuing, needlessly physical play of the Germans, burst through the line and laid the ball into the net for 4-1. And that, too, could have been it.

But no. In heady celebration, the triumphant forward lifted her arms above her head and began gyrating her hips oh-so-slowly, in a manner that one (well, me) doesn’t normally expect to see on a soccer pitch (unless that pitch is hosting a Christina Aguilera show). Anyway, as Cristiane did her slow shimmy, an anonymous camera operator slowly panned down, down, down, the length of her body – and someone in the control booth chose to broadcast the footage to the entire stadium (an act arguably more saucy than Cristiane’s dance). But don’t take my word for it. Trust the camera: 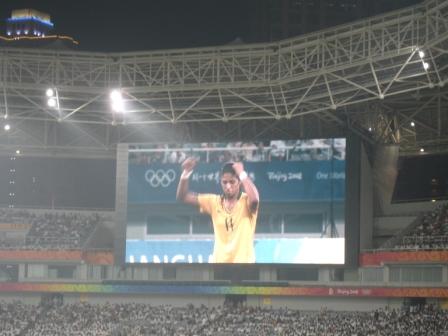 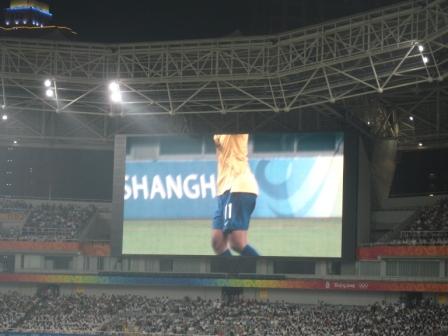 For those few fans in attendance who missed it the first time, the stadium TV crew did us all the favor of repeating the video when action resumed just a few minutes later (the above photos were taken during the encore performance). I half expect to find it for sale in the pirate DVD shop below my building after the Olympics are over.

Oh, and all the white jerseys below the screen? Those are the white school uniforms of the kids bused into watch the game. My favorite Olympic moment – so far.

Anyway, I’m tied down with multiple deadlines for the next couple of days, so I likely won’t be posting again before Wednesday. But! Tune in then for a blogged report from Qingdao’s Olympic sailing competition.