It turns out that – after last week’s two posts in regard to KFC China’s new Tender Beef Pentagon, and its strong, unmistakable relationship to Taco Bell’s hexagonal Crunchwrap Supreme – I am not the only American journalist-blogger in China strongly hankering for a Gordita. So the question remains: why won’t Yum, operator of the most successful restaurant chain in China (KFC), and the most successful “casual dining chain” in China (Pizza Hut), reset its Taco Bell franchise here?

Thanks to a tip from a reader, I found a possible answer (slash, urban myth) in a lengthy China International Business feature on why Yum has fared so spectacularly in China. Buried deep within the text, a consultant by the name of William Gibbons, identified as “a partner at Rainmaker International Associates, a China-US business development consultancy,” answers the question with this old war horse:

“The Chinese palette is just not ready for cheese – it just doesn’t work.”

The article doesn’t mention whether or not Mr. Gibbons and his company have a past or current working relationship with Yum. But in case they do (and the Rannmaker website intimates that they work in franchising and F&B), or in case the folks at Yum are stopping by this blog (strong evidence to suggest that you are), or in case anybody else is under the spell of this urban myth (including the CIB reporter who let Gibbons’ quote fly), allow me to share an image from the pizza menu distribted by the 350+ wildly successful Pizza Hut restaurants in China, to their customers: 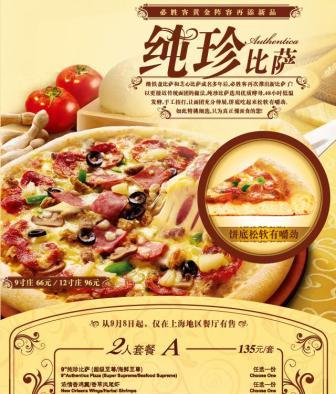 Now get me my Chalupa.