In late October this blog published an account by the British metal trader, Goldarrow, of an alleged kidnapping of one of its traders by a state-owned scrap trading company in Ningbo. Subsequently, I published the rather meager “legal” response of the Ningbo trading company and the trader in question, James Xu. And since then, I’ve spoken to several dozen people about this incident. I’m not going to document the nature of those conversations and viewpoints at this time, except to say that both sides – Chinese and foreign – acknowledge that there was some kind of commercial dispute that set off the alleged abduction, and they’d all like to know what it was.

I’ve been busy with other, somewhat related matters over the last week or so, and I simply haven’t had the time to pull all of the details together. Fortunately, though, Goldarrow’s legal team has done the work for me. Below (and after the jump), for those interested, is the legal claim that Goldarrow is making against Ningbo Yibao. It is, of course, Goldarrow’s side of the story (I published Ningbo Yibao’s here), and as a legal complaint, it is necessarily one-sided. But I believe that – at a minimum – it clears up the nature of the commercial dispute at stake here. Click on the individual pages for an enlarged scan. After the letter, I have a couple of brief comments. 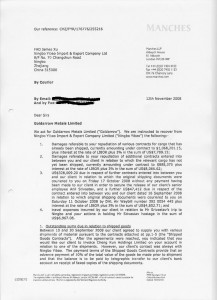 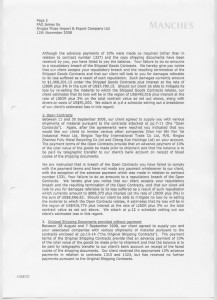 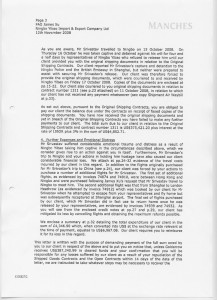 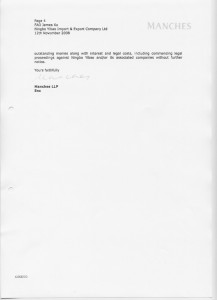 There’s one item that jumps out at me, and in a very, very big way: according to Goldarrow, their contracts with Ningbo Yibao required a mere 10% down payment on the scrap shipped to China, with the remainder paid after receipt of the shipping documents by Ningbo Yibao. Two reasons why this matters:

1. From the time that the contracts were signed, the 10% paid, and the scrap shipped, various grades of scrap metal declined as much as 80%, the fastest such decline in the history of the trade. One might suggest, then, that Ningbo Yibao had two choices: a) break the contract and eat the 10% deposit; or, b) honor the contract and take a much, much bigger loss. Like many scrap consumers in China, they apparently chose the former and left Goldarrow scrambling to collect its money.

2. Earlier this decade, when foreign scrap suppliers first started shipping scrap metal and paper to China, it was common practice to require that the Chinese buyer pay for the entire cargo in advance of shipment. Then, as the trade grew, the markets rose, and trust developed between buyers and sellers, 100% cash payment was slowly replaced with deposits of 75%, 50%, until – finally – a 20% deposit became a sort of informal industry standard. And that worked just fine before the market declined more than 20% over the last eight weeks and Chinese scrap consumers decided that they had more to lose financially – than reputation-wise – by reneging on contracts.

Anyway, the fact that Goldarrow was willing to accept a 10% deposit on scrap shipments is a remarkable testament to the trust that they felt for their consumer, and the international scrap markets. As it happened, that trust was completely misplaced, and Goldarrow now looks naive, at best, totally reckless at worst.

That noted, over the weekend I met and spoke with two additional traders who dealt with Ningbo Yibao, and their chief trader, James Xu, over the last several years. In both cases, these traders claimed similar contract “issues” over the last month (though, minus the alleged abductions), despite the fact that Mr. Xu was, by one account: “the last guy in China whom you’d expect to do this kind of thing.”

Shanghai Scrap: happily accepting any and all documents related to scrap metal kidnappings, worldwide, via the contact form. Anonymity guaranteed!