I was feeling kind of bad about the lack of updates to Shanghai Scrap during the Chinese New Year period – until I stopped by the Shanghai Daily website and found that the Metro section hadn’t been updated in five days. 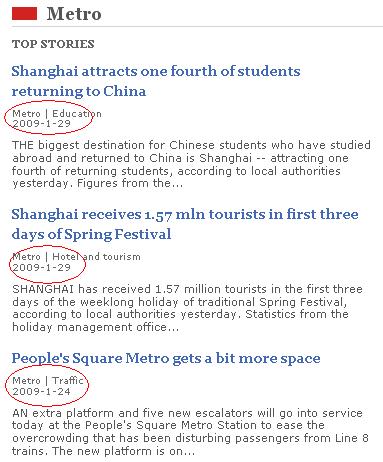 Other sections of the paper – business, world, and national news, for example – have remained current. But, presumably, that’s because those sections are generated by Xinhua in Beijing. So, at a minimum, we must conclude that Shanghai Daily’s entire English-language staff deserted the office for the Chinese New Year. Good for them. Still, can anyone out there think of another city newspaper, anywhere else on the planet, that would totally suspend local news for a several day holiday? I can’t.

TOTALLY UNRELATED, but I’m going to bring it up, anyway. This morning I had my first listen to Bruce Springsteen’s middling new recording (here, at the ‘Scrap, we are otherwise big admirers of the Boss), and no more than twenty seconds into the first track, Outlaw Pete, I said: “Holy smokes, the Boss just ripped off Kiss!” A quick google search revealed that I’m not the only one who thinks so. For further info on this emerging story, and a good laugh, see here.

ALSO UNRELATED, but a nifty piece of reported blogging … Dan at China Law Blog gets the scoop on Obama’s phone call to Hu Jintao in the wake of Tim Geithner’s (dumb) currency manipulation comments.

UNRELATED, BUT EXCELLENT is Rebecca MacKinnon’s outstanding open letter to President Obama in re to US-China relations. It includes this very, very good suggestion:

The U.S. embassy in Beijing should build a Chinese-language website modeled after change.gov, focused not just on U.S.-China relations, but on the range of concerns and interests – from environment, to food safety, to factory safety standards, to education and real estate law — shared by ordinary Chinese and Americans. Some linguistically talented State Department employees should start blogging in Chinese. Open up the comments sections, see how the Chinese blogosphere responds, then respond to them in turn. Translate some of the Chinese conversation into English for Americans to read and react, then translate it back.