I’ll admit: my knowledge of Chinese astrology hasn’t advanced much beyond what I learned from Chinese restaurant placemats in Minnesota. This means that, like many of my ilk, I’ve been under the blissful impression that the Year of the Ox might beckon a bull market, or at least an expansion in the number of human beings who can afford a good T-bone. Alas, I was wrong: in the last 12 hours I’ve had two conversations with people knowledgeable about these astrological matters, both of whom informed me that the Ox brings economic struggle (“If you dream of an ox, it’s trouble,” said one. “Because an ox must work very hard. So it’s better to dream of pigs. Pigs get to be lazy.”).

Me, I haven’t been dreaming of pigs or oxen. I’ve been dreaming of fireworks and, specifically, the ones that have been going off outside my window since Monday afternoon (not complaining). In fact, they’ve been going off with as much – if not more – frequency than what I recall from past Chinese New Year celebrations. So, with a spirit of new year optimism, I ventured down to my street and queried two of the local fireworks vendors (both, seasonal) to get a sense of how the 2009 market in celebration explosives is performing. 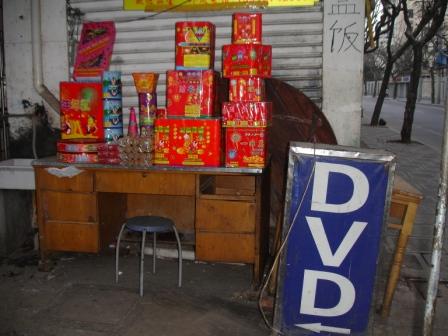 The results were compelling! First, both vendors were quick to point out that last year’s sales were unusually poor due to the unprecedented New Year snowstorms. A more proper point of comparison, I was told, was 2007. Now, neither of these fellas are the kinds of guys who keep detailed sales ledgers, but they were both adamant that the volume of fireworks sold this year was comparable to 2007. Meanwhile, wholesale prices are down and street prices are steady, or up 5% – 10%. Both vendors claimed that there was very little resistance to a RMB 2 (US$.29) or RMB 3 (US$.43) increase on what would ordinarily be a RMB 25 (US$3.66) string of several hundred firecrackers. Those tend to be bought by families. But the large boxed rocket tubes (or whatever the heck those large red boxes are in the photo), already quite expensive (in excess of RMB 200, or US$29.00), are holding steady, price-wise – especially because restaurants and hotels are the primary consumers of that kind of fire-power. And they’re being careful.

An important caveat for anyone (like me, briefly) too ready to draw sweeping economic conclusions from this limited market survey. According to one vendor, the strong market in Ox year fireworks is proof that the economy is actually performing poorly: “People want to scare away the bad luck and the rat year.” I’m sure there’s an economics Nobel in there somewhere.