Earlier this week, Shanghai Scrap told you all about the torturous path that Shanghai’s 19th century Carmelite convent has taken, from after-thought on the Shanghai Film Studio lot, to (apparently) a renovated museum at the redeveloped Shanghai Film Centre . The full account can be found here.

This afternoon I happened to have lunch with somebody who has knowledge of this project, and this person chuckled when I mentioned how wonderful it was that somebody in Shanghai’s bureaucracy cares enough about the city’s history to save one of its oldest (1874!) buildings. Why the chuckle? “No, no, Adam, they are knocking it down and rebuilding it on the old foundation. It will be a new version of the old convent. It’s much cheaper this way. Restoring it would take too much time and money.” That is to say, the museum/convent shown on the blueprints for the Film Centre is a new building, built to resemble an 1874 building. It is not a renovation or preservation. Below, a photo taken at 5:00 PM, today, of the current state of this “preservation effort.” Note how the roof is disappearing (and yes, that’s scrap from the ongoing demolition/”restoration”). 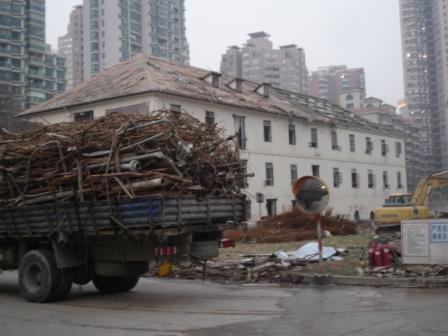 Sadly, this shouldn’t surprise anyone – especially, me – who’s spent any time watching  Shanghainese preservation efforts. Indeed, some of the city’s most celebrated “historic” sites, including the Jing’an Temple and Xintiandi, are poor facsimiles of historic properties demolished to make way for commercial development. That is to say, the original structures have been torn down and replaced with new ones (in the case of the Jing’an Temple, a new temple atop a shopping mall complete with a pirate dvd shop) that the developers, and the city, then market as historical. At the moment, the pre-eminent example of this Shanghai-style type of preservation is Jianyeli. Last year, it was the largest extant block of traditional Shikumen style homes in Shanghai. Today, it is surrounded by sheet metal fencing covered with posters promising, among other things:

So how does the city go about restoring these buildings to their original beauty? Last month I stopped by the site, slipped my camera beneath the sheet metal fence, and snapped this picture: 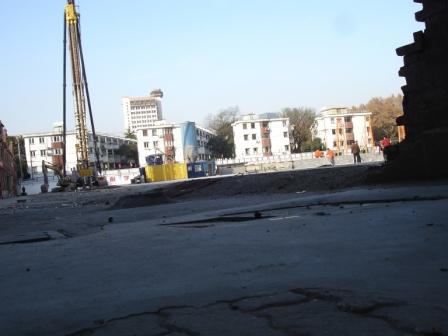 Don’t see any historic buildings there? That’s because the developer, and the city, demolished them (contrast this photo with this City of Shanghai press release touting the Jianyeli project).

Back to the convent.

The person who corrected my understanding of the real “preservation” effort underway at the convent went on to further explain that – all things considered – there’s really no alternative. According to this person, there are only “two or three” restoration contractors in Shanghai, and they’re simply too busy with residential projects (ie, restorations of historic homes for wealthy buyers) to be doing the convent. And anyway, “they’d probably just hire a – what you call it? – sub-contractor.”

I’m in no position to judge whether or not this is a correct interpretation of the preservation situation in Shanghai. But one thing I do know: the architect in charge of the rebuilding of the 1874 Carmelite convent is WWCOT, a Santa Monica, California-based architectural firm. This afternoon I requested information from the firm in regard to this “restoration,” and I’m currently awaiting an answer. Stay tuned.

In the meantime: apologies to my readers for rushing to post too early on this complicated demolition/renovation.