[UPDATE: Make sure to take a look at comment #1, below, left by Rich Brubaker of the All Roads Lead to China blog, in which he witnesses what appeared to be two US State Dept employees soliciting contributions for the US pavilion in a hotel restaurant.]

In the next couple of days I’ll have much more to say about the current status of the US Expo 2010 Pavilion effort. For now, though: a brief but telling example of why Shanghai Expo 2010, Inc, the US State Department-authorized non-profit in charge of funding, designing, and building a US national pavilion, suffers such a credibility gap among some key business leaders and media in Shanghai (for more on this topic, see my Primer on why Shanghai Expo 2010 can’t raise $61 million, as well as this Expo-related post).

On June 4, US Representative Alcee Hastings of Florida (an impeached former federal judge) introduced H.R. 509 into the US House of Representatives. Entitled, “Encouraging the United States to fully participate in the Shanghai Expo in 2010” the non-binding resolution calls upon the US government and relevant stakeholders to support the US Expo 2010 pavilion effort. The resoltion was then promptly referred to the House Committee on Foreign Affairs, where it currently languishes with – according to the Library of Congress’s bill-tracking system – exactly three co-sponsors. In other words: the resolution has little support and almost no momentum.

Now move over to the official Shanghai Expo 2010, Inc., website (again, the authorized US pavilion group), and the undated press release concerning the Hastings Resolution. The pertinent passage, for the purpose of this post, reads:

[UPDATE 6/19: Predictably, Shanghai Expo 2010, Inc. has since removed the offending press release from its website. Fortunately, I made a screen capture of it before publishing this post. You can view it by clicking the thumbnail, below.] 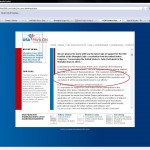 Commenting on the Resolution, Frank Lavin, Chairman of the Steering Committee for the USAP stated, “We are delighted with the strong support from the U.S. House of Representatives. This resolution reminds us that as Americans learn more about the Shanghai Expo, they tend to support it. We are grateful that the U.S. Congress has adopted this resolution and we believe it will be an important boost to our efforts.”

Of course, the US Congress has done no such thing! And that’s easily confirmed with a quick trip over to the official bill tracking site of the Congress. This resolution, which Lavin extols as Congressional support for his effort, is actually supported by less than 1% of the members of the entire Congress.

Now, Frank Lavin is no neophyte when it comes to dealing with the US Congress. He is a former US ambassador to Singapore, and a former Undersecretary of Commerce for International Trade. In both cases, he has been confirmed by Congress, and thus he is certainly in a position to understand that Congress requires more than four members to adopt a resolution. So why would he sign-off on such a duplicitous quote? It’s anybody’s guess (Lavin has refused repeated requests to be interviewed by me). But as I noted at the beginning of this post, the Shanghai Expo 2010, Inc. group suffers a credibility gap among key members of the US business community in Shanghai. It would be generous to call Lavin’s statement an exaggeration; whatever it is, it serves as one more reason for leading US corporations to think twice about whether or not they feel comfortable donating money to the US Expo 2010 pavilion.

Anyway, much more on this topic in the next 48 hours.

[Addendum: It is to the everlasting credit of whomever is covering the US pavilion story that – so far as I’ve been able to determine – nobody has bothered to cover the above Shanghai Expo 2010, Inc press release.]