We are now less than two weeks away from the deadline for the US to begin construction on a stand-alone pavilion for Expo 2010. And, according to Shanghai Expo 2010, Inc., the group authorized to finance, design, and build the US national pavilion, things are looking up. Reportedly, Hillary Clinton has made supportive phone calls to potential corporate donors, and KFC/Pizza Hut has responded with a significant financial commitment.

But even with these relative successes, the pavilion effort still appears to be in trouble. The authorized group has been less than forthcoming about its fund-raising efforts, but according to what they’ve told other media outlets, they’re currently sitting on roughly 10% of the US$61 million that their proposal requires.

A few weeks ago I wrote a primer on the authorized US pavilion group’s failure to raise money. Of the four areas that I outlined, perhaps the most consequential remains the inexplicable veil of secrecy that the authorized US pavilion group, and the US State Department, have thrown over the process to fund the US pavilion. Specifically, both parties have declined offers to reveal the “Action Plan” that governs the fundraising and other activities of the authorized pavilion group. Why does this matter? By any measure, the US Expo 2010 pavilion effort has been – so far – a financial and diplomatic failure of the first order, alienating US corporations, key members of the Shanghai government and – reportedly – angering high-levels of the Chinese government. Presumably, the “Action Plan” has governed the actions of the State Department officials, and private authorized-pavilion organization, that have placed the US in this awkward position. Making it public might not fix the situation, but it surely would go a long way toward explaining it.

Thus, back in January, an interested US citizen filed a Freedom of Information Act request to obtain the action plan, and the Letter of Intent [LOI] authorizing the US pavilion group to begin work on the national pavilion (there remain many unanswered questions about the murky circumstances under which that LOI was obtained, as well – some background, here). Below, an image of the request (click for an enlargement). 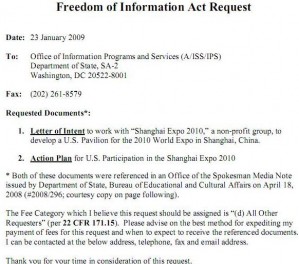 Since then, a State Department official personally turned over the LOI to the requesting citizen. However, the “Action Plan” remains hidden from public view; the State Department and the authorized group will not release it (I’ve also made separate requests from both parties). Late last week, the citizen who made the FOIA request contacted State for an update. On June 11, he was told that “it takes an average of 333 days for a case to be processed.” Which means, if the request is approved, we might know by Thanksgiving (late November) the rules under which the authorized US pavilion group are/were operating.

Just to be clear: this isn’t a top-secret document. It’s not a torture memo (those were obtained via FOIA requests, by the way); it’s not a national security briefing. It is a set of rules governing a pavilion for a fair. So why on Earth won’t the State Department and/or the authorized group consent to its release?

In the absence of any insights into the rules under which the authorized committee is operating, the expat business community in Shanghai is buzzing with rumors about conflicts of interest and the presumed financial interests of the various parties involved in running Shanghai Expo 2010, Inc. Among other matters, some are questioning the propriety of pavilion co-chair Ellen Eliasoph soliciting US – and, especially, Chinese – corporations for donations while her husband – Ira Kassoff, Deputy Undersecretary of Commerce for Asia – continues to work on trade and market access issues related to China and the United States. Some of these concerns could be resolved if the State Department and/or Shanghai Expo 2010, Inc would consent to release action plan which – presumably – contains information on the kinds of restrictions that the authorized must follow in its fundraising. How are donations screened? And are there any conflict of interest provisions in the Action Plan?

At this point, presumably, the authorized group and its State Department overseers are playing for time, hoping that somebody – or something – makes a donation that allows them to begin construction and thus put behind them any questions about their efforts and methods. Certainly, the Chinese Foreign Ministry and Hillary Clinton will be relieved if that happens. But among other key constituencies – including the US businesses operating in China that have refused to join Shanghai Expo 2010, Inc.’s effort, and key members of the Shanghai organizing committee – the memories of this often unscrupulous effort to represent the United States in Shanghai won’t soon be forgotten.