[UPDATE 10/19 – Paul French of the excellent China Rhyming blog just posted some heartbreaking history and images of the White Horse Inn, on the former Ward Road, which was taken down during the recent Hongkou demolitions. ]

[UPDATE 10/22 – Leading the pack on Hongkou-related news, Paul French just posted a very fine item on East Seward Road, which mentions my post. It’s worth noting, as well, that he’s going to be the first author published by Penguin’s new China imprint.]

Spend time in the lanes and alleys of Shanghai’s rapidly disappearing, European-built tenements, and you’ll inevitably find tourists and well-heeled expats taking photos. It’s a legitimate exercise, I think: not only the buildings, but the ways of life that developed in those buildings, are rapidly disappearing, and somebody ought to record them before they’re gone. And yet, despite their picturesque nature, it’s worth recalling that the lanes were and are often miserable places to call home. Poorly insulated, poorly heated, and lacking in privacy – they are everything that affluent tourists who fetishize their atmospherics would refuse to call their own. I wouldn’t want to live in them, either. But does that justify their destruction? Put differently, could some other use have been found for them?

Shanghai is far from the only world city to be dotted with old tenements built for its working classes; and, I suspect, it won’t be the last to see its few remaining tenements rehabbed into expensive lofts – some day. Unfortunately, the time for that discussion is mostly past; most of these well-built structures have already disappeared, and their lots are being rapidly prepped for the anonymous highrises already over-running  China’s other rehabbed cities. Other than real estate developers and dimwitted city officials who think that they’ve just transformed their distinctive districts into something “world class,” I’m really not sure who – exactly – is supposed to be pleased by this.

Which brings me to the sad fate of East Seward Road.

The 1937 Battle of Shanghai damaged large sections of the city’s most famous streets, including the Bund and Nanking Road. But no area suffered more, both from bombs and from infantry, than Hongkou District. By the end of hostilities, entire blocks of the poor, working class district were rubble. Below, an image of East Seward Road (now, Dong Changzhi Road), in the heart of Hongkou, taken in early 1939, nearly two years after the fighting had ended (uncredited photo in the collection of YIVO). Click for an enlargement. 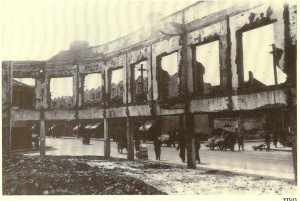 In 1937 Shanghai was already home to a significant population of European Jewish refugees (I wrote about this migration a few years ago, here), while many more were arriving by the week (eventually, there would be roughly 15,000 Jewish refugees in Shanghai, in addition to another 5000 who had arrived earlier, for other reasons). Some came with money, and many more came with an entrepreneurial spirit that – in the space of two-and-a-half years, transformed Hongkou’s ruins into a neighborhood that came to be known as Little Vienna. David Kranzler, in his definitive history of the period, Japanese, Nazis and Jews: the Jewish Refugee Community of Shanghai, writes:

The remarkable transformation … of whole streets in Hongkew [Hongkou]  into European-style avenues, which reflected the refugee optimism, has been noted by several observers. Such streets as … Seward … [were] completely rebuilt. In fact, a minor economic boom was created through the initiative of some enterprising refugees, who helped rebuild Hongkew’s ruins out of its own rubble. From the ruins there emerged new but simple houses, in European style, with indoor plumbing and bathrooms. One shop after another opened up, especially restaurants, open-air cafés, provision stores, snack bars and bars, which proliferated and stood side by side where there was previously but a single coffeehouse.

Below, an image of East Seward Road in 1940. It quickly became one of the main thoroughfares through Little Vienna. Click for an enlargement (also uncredited, in the collection of YIVO). 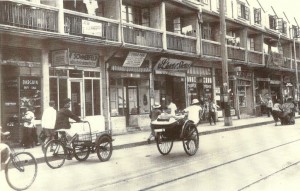 The Jewish refugees began to leave in 1945, and by the mid-1950s all but a few were gone. Ever since, Hongkou’s European-style lanes and housing has belonged to the Shanghainese. And, until the early part of this decade, it remained mostly unchanged (though decaying). It was only in the last several years, as Shanghai began renovating in advance of Expo 2010, that city planners and wrecking balls turned to this mostly forgotten district. But even then, planners and wrecking balls, alike, were slow to reach Little Vienna. There was some chipping away at the margins, but the great architectural losses experienced elsewhere in Shanghai (especially in the French Concession) hadn’t yet arrived.

But really, it was just a matter of time.

On Saturday I accompanied some out of town friends to visit the area. My last visit was four months earlier, and though I’ve become accustomed to Shanghai’s ongoing war against its architectural heritage and – more importantly – the Shanghai lifestyles that developed inside and outside of it – I wasn’t prepared to find that most of East Seward Road had been erased from Hongkou. But that’s what I found: at some point in the last few months, somebody signed the order to demolish it. Below, an image of East Seward, viewed facing south from Chaoufoong Road (now, Gaoyang Road). 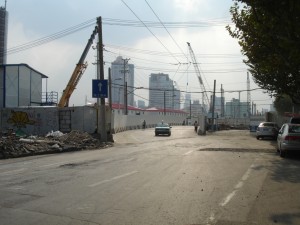 A little further north, an image of East Seward Road viewed from Muirhead Road (now Haimen Road). The left side is gone; the right side is in the process of being demolished. Click for an enlargement: 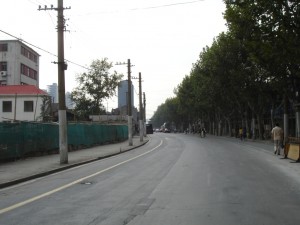 On Sunday, I returned to wander up and down Seward Road, and in and out of buildings, taking as many photos as my camera could hold. It was a depressing exercise, especially walking into the crumbling lanes and alleys where refugees once lived beside Japanese and Shanghainese.  Below, an image of a lane (demolished over the weekend), that once existed in a vast complex at the corner of East Seward Road and Kungping Road (now Gongping Road). Click for an enlargement: 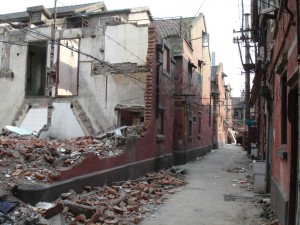 Brick by brick, Shanghai loses its history, its buildings, and its traditional ways of life. In many cases, the bricks in the buildings now crumbling on East Seward Road are the bricks that built the buildings that preceded them (and were destroyed by fighting with the Japanese). They will not get a third chance – at least, they won’t get that chance in Hongkou. Instead, they’re being carted away, perhaps to be landfilled, or perhaps to become anonymous contributors to projects elsewhere in Shanghai. The workers who will lay them for the third time won’t know that they survived the Japanese invasion, and just like that, the remarkable history of modern Hongkou will disappear into a city too busy, and too rich, to care, anymore.

In any case, Kranzler’s book has a nice set of passages about life in the lanes, and I’m going to conclude this post with some excerpts and a few additional photos:

The most common kind of housing utilized by the refugees in Hongkew … was the lane system, which predominated in most of Shanghai … [I]t consisted of a long, wide, main stereet with many dark, narrow lanes or alleys extending from both sides and lined with fairly solidly-built, single, or at the most double-storied houses next to each other … At night, these lanes were closed by gates and sometimes guarded by one or two Sikhs, those excellent tall East Indian guards, members of the Shanghai Municipal police force … The entire scene had a distinctly medival flavor. 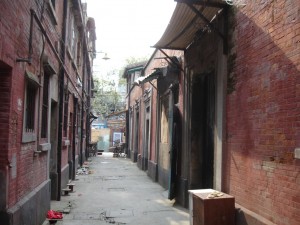 [T]hough ordinarily meant to house a single family, the frugal, enterprising Chinese found themselves able to earn extra money by renting out each of these to an entire family. These “extra” room were often nothing more than partitioned-off backs of former larger rooms by Japanese-style lattive work, sliding panels. Such rooms would often be without windows. It was difficult to fit the large, heavy European furniture into the small, narrow lane house. Occasionally a piece had to be lowered through a skylight, or a room enlarged to accommodate it. 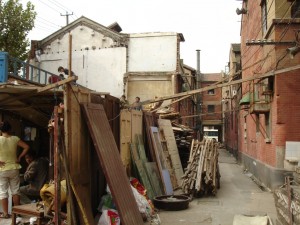 [Kranzler continued] The main tenant usually rented from a landlord who after some alteration produced what looked like a cubbyhole for each of the families. The refugees soon caught on to this means of renting and imitated it. In this manner, refugees with a little money were able to become independent entrepreneurs, by purchasing and rebuilding the lane housing. 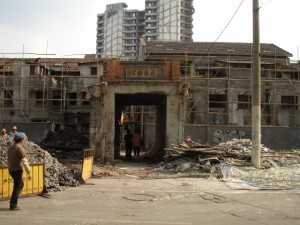