Of the many journalistic beats that Shanghai Scrap really wishes it could cover more fully, none is more tantalizing than the sometimes – nay, often – ridiculous state of expat-oriented advertising in China. It’s a marvelous arena, both in its own right, but also for the insights that it offers into how poorly Chinese companies understand Western tastes, Western companies understand Chinese tastes, and – best of all – how China can make otherwise perfectly reasonable people lose their minds and do/write things that they’d never dare do/write back home. Don’t believe me? Then have a look, here.

So this morning I was flipping through the most recent issue of City Weekend, a popular (most popular?) expat magazine, when I came across this advertisement for an upcoming festival to celebrate the food and wines of the South of France: 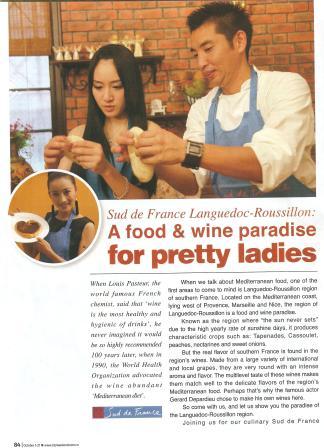 So what are the elements that make this a classic? First, I think we’d be remiss is we didn’t take note of the fact that the headline font expands noticeably over the course of its three lines, from the French name of the province in question, to the all-important “for pretty ladies.” And we’d be even more remiss if we overlooked the hottie in the apron holding the heart-shaped pizza beside the headline.

For me, though, the deeper question is: just who or what is that headline supposed to attract, and why? Three theories:

1. Statement of fact. There are only pretty ladies in the sud de France.

2. The amorous organizers of the sud de France festival hope to attract pretty ladies for their own purposes [very sud de France, that].

3. The organizers and advertising agency are under the impression that ugly ladies are already attracted to food and wine festivals, and thus they need to put more work into attracting pretty ladies (who might be otherwise busy doing – I don’t know – their nails).

Here at Shanghai Scrap, we tend to think that Theory #3 is the correct one, and we’ll go so far as to add a special rider stating that, in addition to expats, this ad is also directed to affluent Chinese.

Not much more to say about this except to note that this same festival, organized by the same people, has already traveled to London, and is now in New York. In both cases, I’m pretty sure, the advertisers knew better than to place “for pretty ladies” advertisements in, say, Time Out. Which just gets back to my point about ordinarily sane people losing their minds, judgment, and good taste when they come to China.

Anyway, back to real work. A longer, and more serious post, to appear tonight or tomorrow morning.