[UPDATE 10/11: Thanks to some very helpful comments, below, I’ve learned that the game is called ‘carrom’ and it’s been played in Shanghai for years. My friend Micah Sittig did a bit of digging, and put together an interesting post that gives a bit of history and Asian context to the game (thanks, Micah!) More recent history in comment 5, left by Tom of the Double Handshake blog.]

Before this afternoon, I thought I’d seen just about every street corner amusement that Shanghai’s game-loving citizens enjoy playing in front of their neighbors: chess to Chinese checkers; dominoes to mahjong; poker, to that weird poker played with those creepytriangular Hunanese playing cards. Then, while walking on Zhoushan Road in Hongkou District this afternoon (just around the corner from the Jewish Refugees Museum), I came across this: 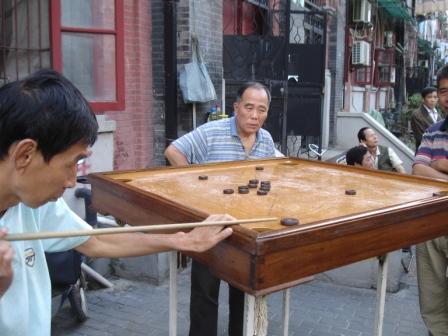 If the photo isn’t clear, these men appear to be using miniature pool cues to shoot Chinese checkers into corner pockets located on a tabletop covered in sawdust. For the few minutes I watched, no money appeared to be exchanged (though that doesn’t mean it wasn’t). There was a second table to the side of this one.

Anyway, if anybody knows anything about this game – is it a Shanghai thing? or just common to Zhoushan Road? – I’d be very grateful for the information. The gentlemen in question didn’t seem particularly keen to answer my questions.