[With apologies to Rene Magritte.]

Not the sexiest topic in the world, but certainly important: on Wednesday, the US Department of Commerce into whether or not to impose anti-dumping and countervailing duties on imports of steel pipes from China. This follows upon the mostly symbolic mid-September imposition of duties on Chinese tire imports, and recent EU duties against the same products.

For reasons that I won’t go into right now, I’ve spent an inordinate amount of time in factories that manufacture the sort of pipe in question here, and I’m personally acquainted with some of the factory owners. Though I’ve no interest in excusing the alleged dumping in question here, I think I can offer some limited perspective on why – in fact – the situation is more complex than the one suggested by the aggressive proponents of imposing new duties. In truth, I don’t expect I’m going to hold many of my casual readers with a discussion of seamless pipe dumping, but I do think that – if you’re interested in how greed and a total mis-comprehension/mis-trust of motives can contribute to trade disputes – this is as good an example as any. 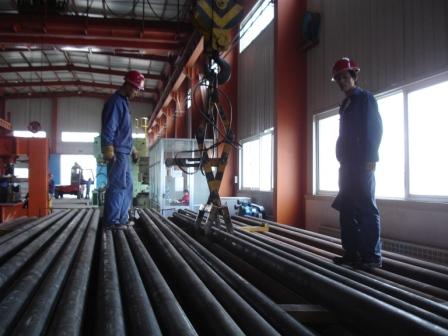 Above, an image of a seamless pipe factory in Qinghuangdao, taken two years ago.

Seamless steel pipe is just what it sounds like: a pipe with no seams suitable for use as a conveyance for high-pressure fluids such as oil and natural gas. To the casual observer, a pipe is a steel pipe; but if you drill for oil, say, you’re going to want every assurance that your pipe is manufactured to certain industry-mandated standards (for example, so that the pipe can handle the threads that may be cut into it at a later date). If you’re a developing country, you need a whole lot of seamless pipe – for water wells, oil wells, and conveying both liquids – and China is a developing country with a whole lot of seamless pipe factories (in and around Tianjin and Wuxi, in particular). Those factories, by and large, are either government-owned (town/village and provincial owned), or they are founded by privately, with the understanding that they’ll largely be supplying government clients (like the oil industry). And, in turn, those cost-conscious government clients, often do their best to ensure that their pipe businesses receive breaks on raw materials (which are then passed onto them).

Low-quality products (and pipes) are often the rule in developing countries. And in China, low-quality is the rule. By and large, it’s hard if not impossible to find seamless steel pipe in China that meets US and EU industry standards (though some manufacturers claim to be able to do it). Don’t believe me? As I describe at the end of this March 2008 post, the downfall of one naive and short-sighted Wuxi-area manufacturer was his inability to procure pipe scrap that even loosely met EU standards. In China, where those standards are barely given lip-service, the low-quality of the country’s pipes really isn’t a problem – after all, the cost of replacing a faulty pipe is so low (low labor/raw material costs). This is beginning to change (Chinese oil companies, in search of better quality, are beginning to send their pipe manufacturers abroad), but for now, the situation is this: China is the world’s largest manufacturer of low-quality, low-cost pipe because its pipe consumers don’t, generally, require anything better.

And, as it happens, there are plenty of small oil and water drilling companies in the US who don’t require much better, either. They just want pipes that are minimally functional. In the oil business, these are generally wildcatters – that is, speculators – and prior to the collapse of the global economy, when oil was taking its momentous run over $100/barrel, the wildcatters were willing to take wild risks in search of oil. When doing so, they preferred/prefer to reduce costs as much as possible by using less-than-industry standard seamless pipe (they’re not Exxon, after all). And guess what? Over the course of the last five years, these consumers of less-than-industry-standard pipes are a major reason that the import of seamless steel pipe from China increased 131% since 2006.

Let’s be clear here: on a one-to-one basis, low-quality, low-cost seamless steel pipes from China don’t compete against the industry-standard pipes manufactured by union steelworkers at US Steel. These are bottom-feeder pipes, and – despite their utility – the oil and water pipe industry in the United States is rife with horror stories about them. They work, to be sure, but a significantly higher fail rate. And that’s why they’re cheap.

This might sound familiar to those who have followed the recent tire tariff story. In that case, as well, the target was not high-quality imports that compete with the best of US manufacturing, but rather poor imports that may not even have a US competitor, anymore.

I’m of the opinion that both the tire tariff, and this pipe investigation, are little more than symbolic efforts by the Obama Administration to placate its labor allies. In the pipe case, we’re only talking about a few hundred million dollars – a pittance, in comparison to the overall US-China trade deficit. One thought: instead of focusing on costs and ‘dumping,’ why don’t the trade hawks in the Obama Administration shift tactics and instead lead an effort to require greater quality from Chinese imports?  In other words, make China compete against the US on the high-ground the US supposedly still holds. One model for this might be Senator Amy Klobuchar’s recent legislation requiring plywood imports to meet the same quality/enviro standards as US-manufactured plywood (a piece of legislation that will, in the short term at least, effectively end the import of Chinese plywood into the US) There are obvious differences here, but the point holds, I think.