A couple of years ago a Chinese friend who works for a large Chinese state-owned company called to ask if I could look at several pages of English that she’d translated for her superiors. I asked her to send it over, gave it a quick once-over, and sent it back. Basic marketing materials, nothing too complicated. Several weeks later I was in Beijing, and met up with my friend. Over lunch she handed me a copy of the annual report for her employer – again, a major state-owned company – and instructed me to turn to the introduction where, to my horror, I found the English-language passages that she’d asked me to check. “You had me check text for the annual report?” I asked.

“My boss asked me if I had any English-speaking friends who could help me.”

Unfortunately, this isn’t nearly so rare a situation as one might guess, and I’ve long wondered – why? That is, why do Chinese organizations with international aspirations (or, at a minimum, affectations) consistently skimp on English translations? Are they cheap? Or, perhaps – as a friend recently suggested – they believe that Chinese is hard, and English is easy (and thus easily outsourced to the secretaries and their English-speaking friends)? Perhaps they believe that only Chinese are capable of translating Chinese thoughts? Look at this way: is there any chance that a major publicly-held US company like, say, Dupont, would trust the Chinese passages in its annual report (no idea if they have any) to a secretary and her Chinese friends?

Anyway, my reason for this digression is an astonishing little volume that I found in a Shanghai bookshop over the weekend. Prepared and published by the people bringing us Expo 2010, China’s latest and greatest effort to prove to the world that it’s achieved – well, I don’t know what. But whatever the Expo is supposed to prove, the title of this officially issued handbook (ISBN# 978-7-80186-899-2) strikes me as contrary evidence: 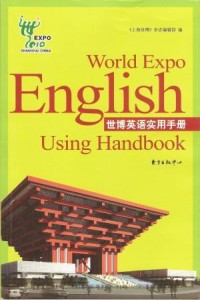 Best as I can tell, the book was written to prepare an army of Expo volunteers to handle the expected rush of English-speaking visitors.

Just to be clear: my issue with the book isn’t the English/Chinglish translations (and believe me, I’ve got no business making fun of the English spoken by native Chinese speakers). But, instead, how those translations clearly didn’t benefit from a second-look by a native speaker fluent in Western culture – and commonsense. For example, this passage from a translated, sample dialogue concerning the Swiss pavilion’s gauzy exterior:

Visitor B: What’s the red skin of the pavilion? Just like a “veil”.

Volunteer: Oh, that’s biological resin, extracted from the fermented soybean fibers, and then attached to the stainless steel mesh structure.

Visitor A: It sounds attractive. We’ll go the queue area. Thanks!

[Click images below for enlarged scans of the printed dialogues] 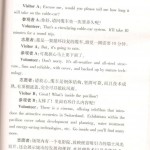 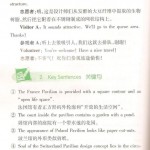 Obviously, the English in this passage is pretty good. It doesn’t qualify as Chinglish. But that’s not the problem: as English, it’s fine, but as language it’s awful. . And so, again, I ask: why didn’t a native speaker get called in to soften this a bit? Didn’t the secretaries have some foreign friends (… or maybe they did …)? I’m dumbfounded.

[Reason for hope: according to Shanghai Daily, native speakers have been recruited to contribute to the ten-volume Shanghai English Language Usage Standards in advance  of Expo 2010.]