Yesterday morning I opened the drapes in my Guangzhou hotel room and what a surprise: I’m located directly across the street from the convention center hosting the 7th Annual Guangzhou Sex Festival. Believe it or not, this was inadvertent – I’m (still) in town for another event located in an adjacent hotel. Then again, I’m also a big believer in providence and so I did the natural thing: had some breakfast, grabbed a camera, and walked across the street.

I wasn’t sure what to expect. My brief reading suggested that it was a salacious trade show of sorts; the morning headlines – featuring a family planning official’s suggestion that the state distribute sex toys to migrant laborers – intimated a debacle. Reality, however, was a bit more bland. More shoddy than salacious, the event is a run-down trade fair attended by retirees (male), unemployed young men between the ages of 26 and 35, and a handful of migrant (male) laborers capable of affording the RMB 30 (US$4.30)  entry fee. Women were outnumbered by 50 – 1, I’d say. Here, for example, is a pretty good representation of the demographics in the form of a small sample of the large crowd that surrounded a video of a (swimming-suit-clad) couple demonstrating certain, ah, techniques. 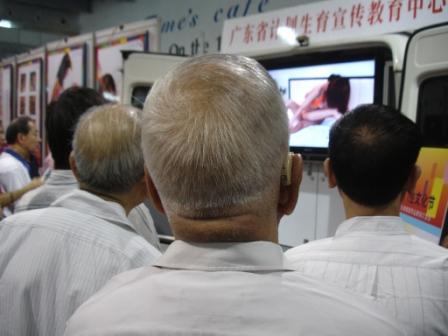 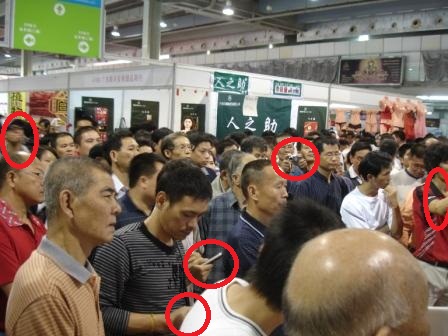 [in case you missed it, the expression on the face of the man in the lower left corner is priceless.]

I think I’ll leave it at that. I do, in fact, have a few more photos. But really, they aren’t anything all that different from what Elaine Chow snapped when she visited the Shanghai Adult Care Expo a few months back (thus temporarily costing Shanghaiist its google adverts). So, in this instance, Elaine, speaks/photographs for me, too.