Regular readers might have deduced that Shanghai Scrap is in the midst of its own version of the Deng Xiaoping’s famed Southern Tour over the last week or so. This afternoon, as part of this sally through Guangdong Province, I arrived in Qingyuan – a city that I visited a few years ago, before it was devastated by a ten-month drought. According to China Daily, rainfall is down 14% over the first ten months of the year, and some 55,000 hectares of farmland have been “shriveled.” Pointedly, the same article notes that – despite the drought – the region is still supplying significant amounts of water to Hong Kong and Macau. Whatever the cause, the view of the Bei Jiang River from my hotel window suggests something is seriously amiss in these parts. Click to enlarge: 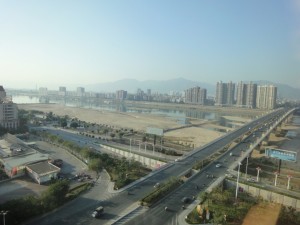