On October 28 the Shanghai Daily ran what now stands as my favorite headline in the history of journalism:

The headline isn’t the best part, though. That honor is reserved for the story itself, which goes something like this: last year, the five individuals in the above photo began working as prostitutes in Shanghai. One day, one prostitute noticed that another was taking prescription sedatives for a sleeping disorder. A plot soon emerged: “let’s make some chocolate, lace it with those sedatives, and feed it to clients with the intention of robbing them after they collapse.” A winning concept, for sure (!), that succeeded on at least two occasions, and would have succeeded on a third had someone not been caught using a victim’s credit card at a cosmetics shop.

Now, I learned long ago not to be surprised by the lengths (and depths) that my fellow expatriate men will go in the pursuit of thrills that they wouldn’t dare seek back home. But I am surprised to learn that these same dimwits don’t have a certain primeval reserve of common sense that would – I dunno – keep them from accepting home-made chocolates proffered by (two) transvestite hookers in the back seat of a Shanghai taxi.

Shows what I know.

I meant to blog about this a month ago, but I just figured that somebody more clever/snarky than me would get to it, first [update: and they did: see comment #2, below, and here]. Didn’t happen, and I pretty much forgot about the whole matter until just a few days ago, when a helpful and trusty friend – one who knows how much joy I derived from the the Shanghai Daily story – forwarded the November issue of “Shanghai Consulate’s News for Americans” to me. The first four pages are rather staid US Consulate type news: H1N1 advisories, travel warnings, tips for consular visits, tax info. But then we get to page five, and this [click to enlarge]: 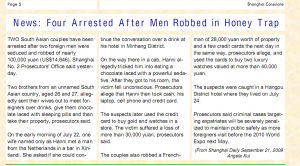